Tom Rachman’s latest novel asks: can a great artist be a good father?

The author of The Imperfectionists on making his characters lovably unlikeable: 'Great literature is full of difficult but compelling characters' 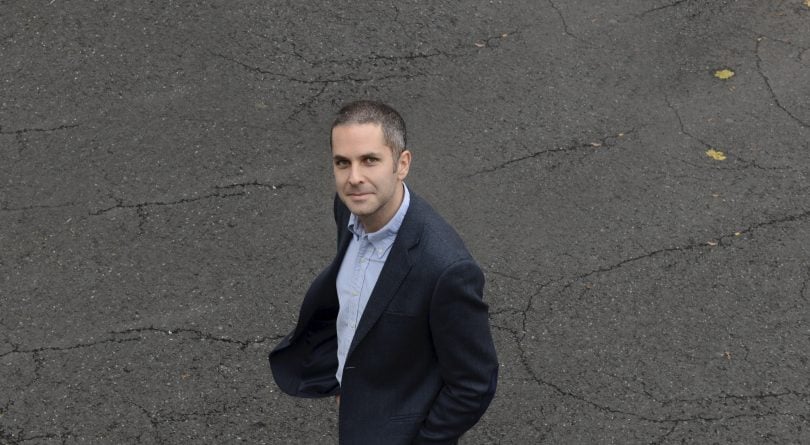 When The Italian Teacher reaches bookshops on March 20, Tom Rachman will have three published novels to his name. From the first, The Imperfectionists—a massive international success eight years ago, translated into 25 languages—through his follow-up, The Rise and Fall of Great Powers (2014), to his newest novel, about an artist trying to find himself in the shadow of his painter father, Rachman has already crafted a distinctive thematic style. His three novels are completely separate in story and setting, but equally stuffed with characters who move easily around the world trying to establish their lives, neither at home everywhere nor filled with contented feelings of rootedness anywhere, all finding themselves as hard to understand as they do the people around them. London-born, Vancouver-raised and educated at the University of Toronto, Rachman, 43, is living in London again, where he is likely to stay a while.

The Italian Teacher is a wonderful novel, even with enough highly irritating characters to lead me to ask if you’re reacting to recent debates over publishing’s demand for likable characters.

I was just looking at my bookshelves and thinking how much great literature is full of difficult but compelling characters. One of the thrills of fiction for a reader is exploring the experiences and thoughts of people totally unlike you. For me, one of the great joys of writing is projecting my imagination into another person. If we were only to dwell on adorable, lovely, kind people it would be totally unreflective of the world and not be that interesting. Besides, there are a lot of people we might love or admire but who, if looked at very, very closely—with the sort of analysis and atomizing and getting right into other people’s thoughts that a novel allows—won’t really come off well. Most people can be fascinating, and I want the literature I read to reflect that.

You manage that very nicely here. Although the painter Bear Bavinsky is a despicable human being, he has his appeal. It’s his son Pinch, who a reader wants to like, who is more troubling in his screw-ups. One lovely line describes Pinch quietly “throttling a towel” after speaking to his father—throttling was exactly the urge he frequently impelled in me.

That’s so funny. It’s really interesting to hear other people’s perceptions of my books. People will say some character was endearing, so-and-so I despise, so-and-so irritated me or drove me mad. And in most cases I find myself startled. When you’re writing you become so intimate with these people that you evaluate them as if they’re very close family members. You don’t think family is nice or horrible in the way that you might with someone encountered in a shop or at work because you know them too well to have a uni-faceted view. So I’m taken aback to hear you describe Pinch that way because I think of him in a different way.

It’s a thematically dense novel that’s also very funny. That seems to be an important mix for you.

I suppose my taste has always been at that border between terribly sad and amusing and funny, and not in a cruel way, I hope. But the funniest novels are the saddest novels or the saddest novels are the funniest ones sometimes. The films and literature I’ve loved best have often found humour in deeply upsetting situations. One that comes to mind is A Handful of Dust by Evelyn Waugh. The ending of it is absolutely extraordinarily poignant and painful and terrifying, but there’s wit from the first word. For me, all humour has that root to it—the fact that things end despite all our best efforts, that we are more likely to fail than to achieve, and yet amid that there’s amazing bliss to be had, including laughing at the preposterousness of it all.

How autobiographical is Pinch’s time at U of T?

My own time there was a couple of decades later, but the settings are ones I’m familiar with. It’s like the Rome of The Imperfectionists—I wasn’t there at the time of the novel but I have lived in Rome and used places that I felt confident about describing. Same with Toronto. The one thing very much rooted in my own life is that for Pinch’s university experience I really summoned my feeling of what it was like to attend U of T—that thrilling connection with characters I would never have met anywhere else, the way that opens up your life and changes you forever. I was trying to capture that, not to mention working in tiny little bits of Brideshead Revisited stuff, too.

And Pinch’s mother is Canadian. Does this affect her as a character in any way?

One of the things that my characters have in common is a sort of a national confusion, one that certainly reflects my own. Rise and Fall is very much about the idea of not being sure where you’re supposed to be. Many of my characters end up in a different part of the world and then find that they don’t really know where they fit. Natalie’s Canadianness is the start of the person that she’s going to be.

Does Bear have a real-life genesis?

He’s not modelled after any particular person but he’s certainly inspired by a lot of artists I researched. I was interested in why so many great artists are appalling human beings. I had personal reasons, too, for wondering if it was necessary, should I want to proceed in the arts, to be extraordinarily egotistical and put my work before absolutely everybody around me. There’s no denying, if you start looking at the history of the arts—not just visual arts but certainly literature as well—a large proportion of those who have thrived have also been absolutely ghastly.

I was going to ask you about literary parallels, so please continue.

I was interested because this was at a point in my life when I was thinking about whether to start a family. During my 20s and 30s I had lived a professionally ambitious life trying desperately to figure out a way I could write, something I longed to do, and explore all sorts of experiences and do all the things that young people do in a quite self-directed and ultimately selfish way. But I thought I was getting to an age where either I am going to have kids or I’m not. In its way this book is a personal exploration of my own fears of what would happen if I were just really awful, just continued on in a way that could really hurt another human being. So it was my fear that I was writing in this book, given what I found through the research about how many lives have been blighted by the behaviour of the supposedly great artists. The other question, which is also there all the way through, is what makes an artist great? By what merit or fluke or social skills does one artist become a great Bear Bavinsky and another artist of equal quality is a Natalie. Or a Pinch. And, yes, there are an awful lot of parallels in the literary world.

You write a lot of journalism, mostly on art or politics. Do you like writing non-fiction as much as fiction?

I love it. Yeah, I love it. My dream was always to try to make a career out of writing, period. I don’t believe the distinctions that creative writing programs and the like have inculcated necessarily apply. Many of my writer heroes did both. But that’s what I always strived to do. I also strongly believe that each side enriches the other in invaluable ways. There’s a terrible danger for fiction writers of ending up writing the same book over and over again because their entire production is based on their lives before the age of 30. If you’re not renewing your experience, you risk becoming repetitive. That’s the practical reason, but actually I just love going out and around. I’m just back from a reporting trip to Rwanda. It was amazing and I feel like a different person than I was when I left. That’s what non-fiction writing can offer.

To return to Pinch’s “national confusion,” he’s a bit Canadian and a bit Italian, but he’s mostly an “anywhere,” as in that anywhere/somewhere dichotomy popularized by David Goodhart. The former are educated urbanites who move about the world as easily as Tom Rachman characters; the latter are less cosmopolitan and more rooted in specific places. And you are so anywhere yourself.

Is it that obvious?

Uh-huh. Do you buy into that dichotomy or do you have some doubts about it? It seems to explain a lot.

I think it does. Like any of these things, it’s a simplification. When people talk about Brexit or Trump they always say it’s between X and Y—conservative and liberal, or North and South, or educated and uneducated, or old and young. What’s clever about this anywhere/somewhere one is it actually captures many of those different traits in one. It’s particularly useful for explaining to anywheres like me how the majority could opt for something so self-harming and foolish as Brexit. As somebody who loves working in journalism as well as writing fiction, I am fascinated and sometimes appalled by the world I live in and very interested in the ways individuals link, or not, to huge events, why people make the decisions they do. A lot of my characters have this question of whether you are necessarily a product of your times or if you can make your own world despite the times you’re in. I think that question will continue to be in whatever I write.

You sound like you’ve always had trouble with this belonging thing. Are you more settled in London now? Is it more like home?

Not necessarily, though I do have a two-year-old boy now.

Ah, that’s how that decision turned out?

Exactly. That’s how that went, and I’m getting great joy out of fatherhood and helping raise and discover this person. It’s been wonderful, and also a step that makes being rootless more practically complicated. But I don’t have the dread I was exploring in The Italian Teacher, the fear of getting it wrong with parenthood. Not that I’ll necessarily get it right, but I know I’m really going to try because I really care about it. So I feel an obligation to not live like a roaming correspondent dragging a child along to whatever school. Might make for a nice book, maybe, but not a nice life. I think that circumstances will put me here for a while.