How the architect of a World's Fair misread the future

A review of "Tomorrow-land" by Joseph Tirella 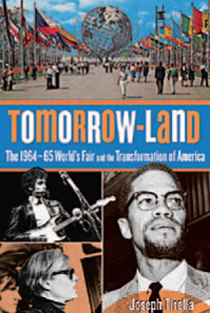 Tomorrow-land: The 1964-65 World’s Fair and the Transformation of America

The 1964 New York World’s Fair isn’t as famous as the city’s previous fair in 1939, but, according to this book, maybe it should be. If the 1939 event was the last look at the world before the Second World War, then the 1964 fair turned up at the exact moment when the early ’60s were giving way to the late ’60s, and American culture would change forever. Throughout Tirella’s book, we are shown the contrast between the fair, an idealized version of a multicultural future in the optimistic spirit of John F. Kennedy, and the world outside the fair, where Kennedy was dead and a new, wilder era was taking shape.

The central figure of the book is the public-works mastermind Robert Moses, the architect of the fair and the man Tirella describes as “New York’s master builder.” He was determined to create a fair that would be profitable, unlike the one in 1939, and Tirella’s story is really the story of how he failed to achieve this goal, in part by creating an event that didn’t really keep up with the times. Though he eventually developed a certain affection for the Beatles, Moses fought to keep “cheap rock ’n’ roll trash” marginalized at the fair, instead hiring his friend Guy Lombardo and His Royal Canadians as the main musical entertainment: “He is also a favourite with many of the kids,” Moses insisted, “if not the wildest ones.” Like the fictional Don Draper on Mad Men, Moses comes off as a character unprepared to deal with the shift away from the sedate grown-up culture of the early ’60s and unwilling to embrace the teenager-oriented culture of the later years.

Perhaps too much of the book is devoted to unrelated ’60s events, such as Malcolm X and his split from the Nation of Islam. This can make Tomorrow-Land feel a bit thin as history: Tirella sometimes seems like an actual World’s Fair attendee, wanting to get away from the dull fare at the fair (including the Ice Capades) and into the more exciting world outside. Still, the portrayal of the fragmenting culture of the ’60s does help to explain why Moses failed in his goal of creating a fair that would appeal to everyone, at every time: The most famous ride of the fair was Walt Disney’s “It’s a Small World After All” which featured a world of international puppets, but, in the real world, that kind of trouble-free brotherhood was nowhere to be found.