By Arnold Schwarzenegger with Peter Petre 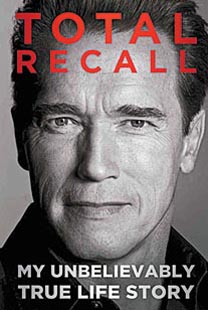 By the age of 10, Schwarzenegger was convinced he was special and meant for bigger things than postwar Austria had to offer. He landed in America in 1968 with a Mr. Austria title in bodybuilding and very little English. How he parlayed his immigrant status into a Hollywood career, marriage to a Kennedy and two terms as the Republican governor of California is the story that fills these pages. Like everything about Arnie, the book is outsized, and there is enough content to justify the 624 pages. But is there enough charm?

The broad strokes of his astonishing life story are well-known, so the surprises are fun. Lucille Ball followed his career like a mother, sending him notes after every film. He kept his mail-order business for bodybuilding accessories going for years after his acting career took off. He ran his own construction business while taking acting lessons, and he built a real estate empire to allow him the financial freedom to turn down lousy acting roles. Milton Berle was his comedy coach and mentor. His famous Democratic in-laws were unlikely allies, encouraging his political career. Seemingly unspoiled by stardom, Arnie appreciated the value of marketing and never resented the tedious promotion needed to sell a movie, a book or a political proposition. As governor, he allocated billions for stem cell research and pushed through historic legislation to cap greenhouse gas emissions.

So, where’s the charm? This reader didn’t detect any on the page. Neither is the book funny, despite Schwarzenegger’s assertions that others find him humorous. What he does best is itemize his fortune and critique movie marketing. As for the scandal about his illegitimate son with the housekeeper, Arnie dismisses it in a few pages, writing, “My whole life I never had anything going with anyone who worked for me.” (Maria must have taken cold comfort in that qualification.) There isn’t enough charm in the world to undo that sentence.