Review: Trent: What Happened at the Council 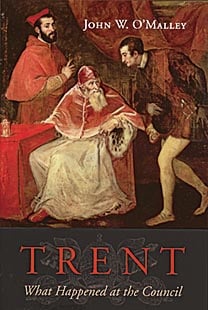 The Roman Catholic Church council in Trent, Italy, which concluded 450 years ago, has always been recognized as a key event in the cultural and religious history of Europe. A bogeyman to many contemporary Protestants dismayed by the Church’s successful rally against the tide of reformed Christianity, Trent has almost as many detractors among Catholics. For every traditionalist who believes Trent kept the Church strong until it was lamentably weakened by Vatican II, there is a liberal Catholic who believes precisely the opposite. The Tridentine mass, the uniform Latin rite extended to the entire Church by Trent, remains a large bone of contention.

For all that, argues O’Malley, a Jesuit and prominent historian at Washington’s Georgetown University, what actually happened at Trent—and brought five popes, two Holy Roman emperors and other European monarchs repeatedly to the brink of disaster—remains little known. O’Malley’s take is enlivened by the way he refuses to neglect the mundane details for the high theological debates. Trent was a small town, which struggled mightily to house and feed the attendees, in an era when an important cardinal travelled with a retinue of 150 and their even more numerous horses. The broiling summers stoked the tempers of the northerners, while Spaniards and southern Italians were appalled by the winter snowdrifts. The town was a hard three-day ride from Rome, not far enough to safely ignore frantic papal instructions, but far enough to cause frequent delays while the dispatch riders whipped their horses, sparking one delegate’s sardonic observation that, unlike previous councils where the Holy Spirit descended on bishops from on high, at Trent, he arrived via the papal mailbag.

Complicating everything was the fact that the popes were both spiritual leaders and temporal powers, monarchs with armed forces, prisons and courts, who needed money every bit as much as rival kings did. The popes were far more open to doctrinal than financial reform. O’Malley’s lively narrative shows how so much was accomplished despite the chaos and difficulties: Trent, even when it didn’t enact legislation itself, set Catholicism on the road to reforming its late medieval abuses.