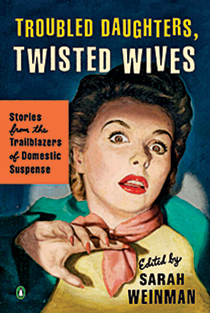 Have no fear: you don’t need to be a pipe-smoking, Scotch-mint-eating uber-fan of crime fiction to become engrossed in Troubled Daughters, Twisted Wives, Weinman’s collection of short stories by female crime writers. Weinman’s enthusiasm for and knowledge of the genre will guide you through. Though if you are a fan, you might find new favourite writers in these 14 stories of domestic suspense that unravel in the very place we expect to feel safest—at home.

As an ardent fan, Weinman tells us in her informative introduction that she began to wonder who had set the scene for successful female crime writers such as Gillian Flynn (author of last year’s Gone Girl) and Sue Grafton (best known for her “alphabet” series featuring P.I. Kinsey Millhone). Weinman’s research uncovered a generation of female writers from the early 1940s to the mid-1970s whose names had just about been forgotten. Though Patricia Highsmith’s inclusion in the book might not be entirely surprising (certainly her 1955 novel The Talented Mr. Ripley will register for most), other names will likely be new and pleasant discoveries.

The stories are fittingly arranged in chronological order by the age of the protagonist, and each is preceded by a bit of background on the writer. A creepy standout is Nedra Tyre’s “A nice place to stay,” first published in Ellery Queen’s Mystery Magazine in 1970, about how far one woman, unable to break out of oppressive poverty, will go to find a place to call home. Some of the stories feel less dated than the others, but it’s a solid collection: all share the theme of women struggling with situations that are toxic, or at least unbearable in their estimation. The quiet and calculated ways these women navigate their burdens and the dark and desperate ways they plot their escapes make for some creepy, fun reading.