Tudors: The History of England of Henry VIII to Elizabeth I 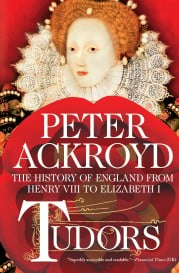 The son and three grandchildren of the first Tudor monarch, Henry VII, ruled for just 94 years, yet they changed England irrevocably. By seizing the vast holdings and wealth of the Catholic Church, breaking with Rome and putting the sovereign as head of the Church instead of the pope, they set England apart from Catholic Europe. English Catholics were so violently repressed by Henry VIII and his son Edward VI that not even the five-year reign of his Catholic daughter, Mary I—who earned her reputation as Bloody Mary—could reverse the inevitable shift away from Rome.

As Peter Ackroyd shows in his absorbing and fabulously readable history, Tudor parliaments were also laying the foundations of what would one day become a modern state government. In 1553 the first workhouse was established in Bridewell. Ten years later, the concept of a minimum wage was introduced, as was the idea of an annual work contract. Along the way London created five “hospitals,” including St. Thomas and St. Bartholomew, that exist today.

Where the Tudors couldn’t succeed, however, was in their personal lives. Henry VIII’s marital woes are so notorious that the phrase, “divorced, beheaded, died, divorced, beheaded, survived,” is used today. And of his three children, only Mary would be wed, unhappily, to Philip II of Spain. None would have children. And that lack of heirs would envelop England in decades of plots, espionage, strife and worry.

In 1562, when Elizabeth caught smallpox, everyone feared she was dying, including the monarch herself, who later wrote that “death possessed almost every joint of me, so as I wished then that the feeble thread of life” could be cut. Her panicked advisers faced a calamity: the closest heir was Mary, Queen of Scots, a Catholic. Desperate for a Protestant successor, they finally fell upon Lady Katherine Grey, sister of Lady Jane, who usurped Edward VI for nine days in 1553 before being executed. And Katherine came with her own legal issues. At the time she was locked in the Tower of London, disgraced for marrying the earl of Hertford without the queen’s consent. Thankfully the crisis passed and Elizabeth recovered. Yet, as Ackroyd writes, “the fact of her mortality was now evident to all the nation and to the lady herself.” Forty-one years later, the age of the Tudors was over, and the reign of the Stuarts had begun.