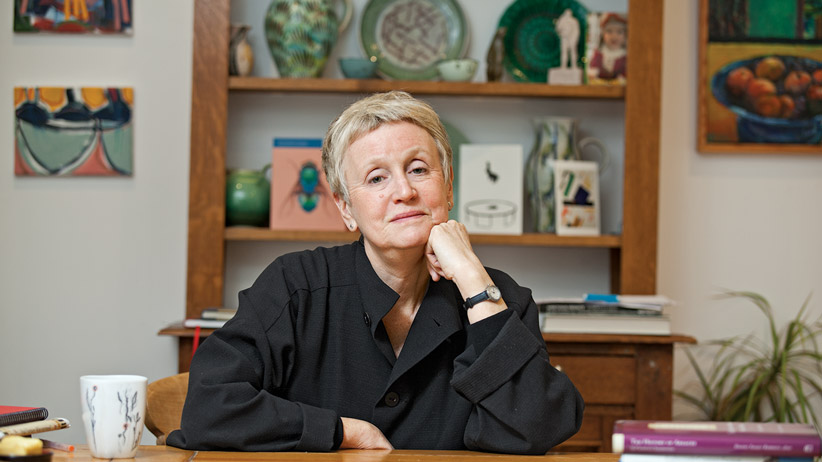 In 1988, Saskatoon-born historian Barbara Taylor, overwhelmed by anxiety and self-medicated with alcohol and tranquilizers, was admitted to London’s Friern Hospital. Her long years of madness, as she calls them, coincided with a sea change in mental health care; Friern, once Europe’s model asylum, closed its doors, as did most others across the Western world, soon after Taylor left it. In The Last Asylum, she intertwines her own painful story with the larger history of that still-unfolding revolution, summing up what was gained and what was lost by institutional closures. It was a challenge, she says, to reconstruct and set out intimate memories, “but I couldn’t otherwise have written the book; it wouldn’t have rung true.” Instead, Taylor, now a professor at Queen Mary University in London, used her specialized training “to turn myself into a historical subject,” one of many at the heart of her remarkable account.

Here, as part of a series on the RBC Taylor Prize nominees, an exclusive excerpt of Taylor’s book, The Last Asylum:

November 2002. I put on a skirt and jacket and head up to Friern Barnet, in the north London suburbs. Princess Park Manor is a palatial apartment complex on the south side of Friern high street. The sharp-suited woman in the sales hut by the Manor’s front gate seems excited by my visit. Maybe sales have been slow? This is not a well-heeled neighbourhood; will anyone who can pay a half-million for a two-bedroom flat really want to live here? I flip through the glossy brochures, check the location of the show apartments, and head along a flower-lined path toward the main building. When I am out of sight of the sales hut, I leave the path and walk across the lawn to a door on the building’s far right. The door opens into a sunny corridor with polished wooden floors. I climb to the first floor, on to a small landing with a numbered door. I stand there. Sounds from within? No, nothing . . . Silence. So we have really been exorcized then? Not even the echoes of our voices trapped in the walls? Surely the stench of our cigarettes, our endless cigarettes, must still be detectable? But all I can smell is fresh paint and floor polish.

Princess Park Manor was my loony bin, my nuthouse. In the late 1980s, I spent nearly eight months there. None of the sales literature mentions the Manor’s previous incarnation as Friern Hospital, yet in its own way it was top-drawer even then. Entering it for the first time in July 1988, I found myself in what had once been England’s biggest and most advanced psychiatric institution: the Middlesex County Pauper Lunatic Asylum at Colney Hatch, or “Colney Hatch,” as Friern was universally known until the mid-20th century. Like nearly all of Britain’s old asylums, the hospital was slated for closure. After my admission, my friend, the historian Raphael Samuel, had come to visit me. He looked around the vast, drab ward with undisguised fascination and embraced me. “Darling Barbara! What a privilege for you, as a historian, to be present at the demise of one of the last great Victorian institutions!” His words both annoyed and amused me, but they lodged inside me—and this book is the result.

I had always been unhappy. Moving from Canada to London, aged 21, I had thought to leave my unhappiness behind me. But it travelled with me, and in my late twenties it took a frightening turn. I became horribly anxious, unable to sleep, plagued by mysterious bodily symptoms. In 1981, when I was 31, I broke down entirely for a time and decided to seek help. Many of my friends were in psychotherapy, so this became my route. In 1982, I began seeing a psychoanalyst. Within three years, I had lost all semblance of ordinary life; three years further on, I was admitted to Friern. I spent nearly four years in the mental health system, either as an inpatient or a day patient. While I was in Friern, I lost my home, and went to live in a psychiatric hostel. By then, my world had contracted around my illness and I believed I would be a lifelong mental patient.

This was not to be my fate. But if it had been, what then? What would the rest of my life have been like?

This book is, in part, an attempt to answer this question. My years as a mental patient coincided with a revolution in the psychiatric health system. Right across the Western world, people with mental disorders were being decanted out of the old asylums into the “community.” I was formally discharged in 1992. Friern closed the following year. By the end of the decade, nearly all the mental hospitals had gone. I had lived through the twilight days of the Asylum Age.

The Last Asylum is the story of my madness years, set inside the story of the death of the asylum system in the late 20th century.