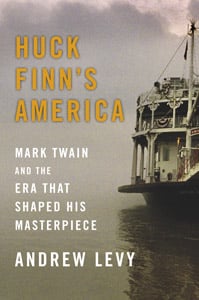 Literary classics don’t just travel through the ages; they pick up baggage as they go. Saying something new about The Adventures of Huckleberry Finn is as difficult as reading the book without any of its attendant luggage.

Andrew Levy has managed to do both of those things, in an intensely relevant study that brings Huck Finn into the 21st century, by firmly placing it in the 19th. Though counterintuitive, this would have pleased Mark Twain, who believed that history wasn’t progressive, it was “echoic.”

Levy, a professor of English at Butler University, chipped away at his book for 20 years, a period that spanned the long shadow of the Rodney King riots and the latest racial unrest relating to the deaths of Michael Brown and Eric Garner. In an echo of Twain, who was writing a supposed idyll to his antebellum childhood, even as Reconstruction failed and the groundwork for the Jim Crow laws was being laid, Levy is writing in an age that proves how cyclical history is—and how vicious it can be.

Untangling Huck Finn’s complicated racial politics means untangling our own. Twain designed an ambitious promotional speaking tour for the unveiling of his book—travelling through northern cities, performing in the voices of Huck and Jim. If this sounds like minstrelsy without the cork, it is, and it allows Levy to discuss the most complex issue of not only Huck Finn, but of huge chunks of American popular culture. Levy’s contention that our modern racial sensibilities only allow us to see minstrelsy as an embarrassing relic, while being unable to apprehend its adumbrations in everything from the beat poets to Miley Cyrus, is as uncomfortable as it is eye-opening.

Huck Finn is often remembered as a paean to a lost American boyhood. This misreading is upended early in Levy’s book, with the author reminding us that 130 years ago, one in six children died by age five and one in six were labourers. More, Huck Finn was the abused son of an alcoholic, detested schooling and religion, and experienced suicidal ideation.

Huck Finn isn’t a simple children’s adventure story, the book suggests, any more than it is a fable of racial conscience. But these misinterpretations show us as much about the American project as Levy’s close reading does. The sanctimonious celebration of righting wrongs by embracing a mythical national character (at the expense of truly embracing the wrongs committed) is something that the sardonic Twain would have revelled in lampooning. But it would have given him little joy to know that his darkest thoughts about the nature of American life were true—and would be true over and over and over again.