Le Guin: 'Can America go on living on spin and illusion, hot air and hogwash, and still be my country? I don’t know' 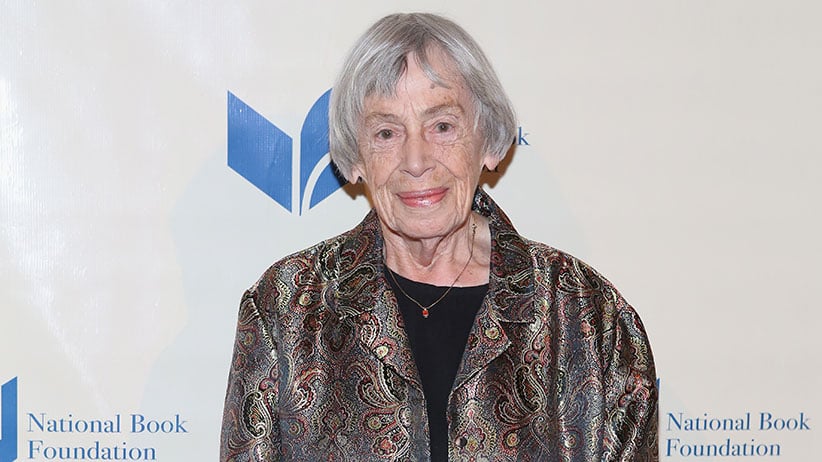 “I never met a computer screen till I was getting on towards decrepit,” says Ursula K. Le Guin, via email. It is a surprising admission from a well-known writer of science fiction—especially one who, in the 1960s, dreamed up the “ansible,” a faster-than-light communication transmitter, though she’s making up for that. Her new book, No Time to Spare, collects essays she wrote for her website, and it’s defiantly not a heartwarming case of “senior citizen discovers Internet, starts nostalgic blog.”

At 88, the Oregonian author of The Left Hand of Darkness and The Dispossessed approaches a range of subjects in a typically blunt way. On aging, she writes: “With all good intentions, people say to me, ‘Oh you’re not old!’ And the Pope isn’t Catholic.” On the United States military: “We dress up our soldiers in clothes suitable to jail or the loony bin, setting them apart not by looking good, looking sharp, but by looking like clowns from a broken-down circus.” On U.S. democracy: “Can America go on living on spin and illusion, hot air and hogwash, and still be my country? I don’t know.”

This last passage is from an essay dated 2012, before Barack Obama’s re-election; Le Guin called out his “false figures and false promises in the first debate.” When asked about President Donald Trump’s dubious relationship with the truth, she replies, “I’d say it isn’t merely continuing a trend, it’s fanatically carrying out the consistent direction of Republican politics ever since Eisenhower. If the Democrats imitate this lie-yourself-to-the-presidency ethic, this shameless contempt for fact, instead of standing up against it, we’re in a bad way.”

One doesn’t turn to Le Guin for comfort. Her most famous novel, the YA classic A Wizard of Earthsea, predated Harry Potter in depicting a school for wizards, but it’s devoid of good-over-evil triumphalism: Le Guin’s approach is informed by Taoism, where opposing forces are interdependent.

She elaborates in No Time to Spare: “Yang is male, bright, dry, hard, active, penetrating. Yin is female, dark, wet, easy, receptive, containing. Yang is control, yin acceptance. They are great and equal powers; neither can exist alone, and each is always in process of becoming the other.” For Le Guin, there’s an overabundance of yang in American culture—one that’s reflected in its science fiction. She says, “Many contemporary dystopias provide such a great opportunity to wallow in gratuitous cruelty and mindless violence. Yin is for losers.” So much, then, for the philosophical cautionary tale.

It’s not that Le Guin believes outright yin acceptance will somehow save us—in No Time to Spare, she reflects back on the days of second-wave feminism: “Anger is a useful, perhaps indispensable tool in motivating resistance to injustice.”

And today? Le Guin replies: “I can’t pretend I’m not angry about what’s being done to my republic, the savage injustice with which the poor and the immigrant are treated, the rape of the land and the waters to make bucks for the filthy rich. You see how cool and calm I am? But I still think anger used as a weapon will always tend to mere destruction, and seldom if ever does as much good as anger used in the service of intelligence and goodwill.”

Le Guin’s book is at times passionate, but she also probes American culture with an almost scientific detachment. She describes herself as an outsider who can be so discomfited by her own species that she’d rather spend time with others. Feeling “inadequate and out of place” at a museum wine-and-cheese, she wanders off to stare at a lynx living behind glass, and warms to its “unexpected, splendid animal presence.”

The alien and fantastic creatures and cultures she has imagined over the decades still resonate today: her work, as genre fiction and uncategorizable literature, is being reprinted by the Library of America (with Philip Roth the only other living writer to be afforded this honour). Earlier this year, her last non-fiction collection, Words Are My Matter, won science fiction’s Hugo Award for Best Related Work. And her ground-breaking novel The Left Hand of Darkness (1970), set among the gender-fluid humanoids of the planet Gethen, has recently been adapted for radio, TV and the theatre. She says it has made her happy “to find myself surrounded in my old age by Gethenians who don’t have to pretend they aren’t.”

And although it’s been nearly a decade since her last novel (2008’s Lavinia), her essays find her returning to her fiction’s concerns. In No Time to Spare, she writes about how hunger afflicts “about a third” of children in the U.S. Inevitably, this summons up her 1973 story, “The Ones Who Walk Away from Omelas,” in which a society’s seemingly utopian prosperity depends on confining one small child, alone, in squalor and hunger. The story, she says, “is a parable of social injustice; but it also asks questions about how willing, how able we are to do anything about righting it, in the current state of human society and ethics. The story is that question. It offers no answer.”

Le Guin herself is not inclined to be prescriptive—or even to say whether she finds reasons for hope in these tumultuous times. Her blog-essays, she says, “come out as they come out, sort of like kittens. Anyhow, I guess I don’t feel that a writer’s job (in fiction, or poetry, or blog-meditations) is to answer questions. I try to find useful and interesting questions to ask. And how to ask them—that’s the really tricky part.”

FILED UNDER: A Wizard of Earthsea Editor's Picks No Time to Spare The Dispossessed The Left Hand of Darkness Ursula K. Le Guin