Book Review: An Entirely Factual Account of a Year (C. Ad 2009) in a Large City 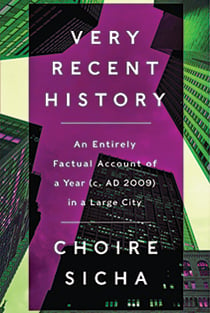 Very Recent History: An Entirely Factual Account Of A Year (C. Ad 2009) In A Large City

New York has never looked smaller, more claustrophobic and insular than it does in Sicha’s debut book, a non-fiction account of a year in the lives of pseudonymous gay men all on the brink of not quite being young anymore. It’s 2009, and John, Chad, Edward and all their friends are hovering in a post-financial-crash haze. They have jobs—most of them—and apartments and enough money to get by almost until their next paycheques. But none of them feel settled. They go out a lot. They pair up. They break up. They sleep around. They keep in constant touch online and on their phones as they navigate life in the small town that doubles as the centre of the universe—New York City.

Sicha is a New York creature himself. A new-media nomad, he was an editor at Gawker, twice, and later founded The Awl, a rival blog network. In between, he worked at the New York Observer. And though it’s never mentioned by name, it’s clear that John, the closest thing the book has to a main character, still worked there in 2009. Upheaval at the paper, which shed editors and employees throughout the year, mirrors the chaos in John’s financially insecure life.

Sicha writes with an air of anthropological distance, as if 2009 were the distant past. He defines common terms ad nauseam. (“A hedge fund took rich people’s money—at their request—and made more money with that money,” for example.) And his prose is often flat and unaffected. That said, this is a book with genuine style. Rare for good non-fiction, it’s as interesting—or more—for how it’s written as for what it’s written about. It’s not perfect, but it is significant, and a very fun read besides.