John Geddes: Reading lists for outlasting COVID-19 have leaned on plague stories. But what about the personal, interior aspects of this coronavirus year? 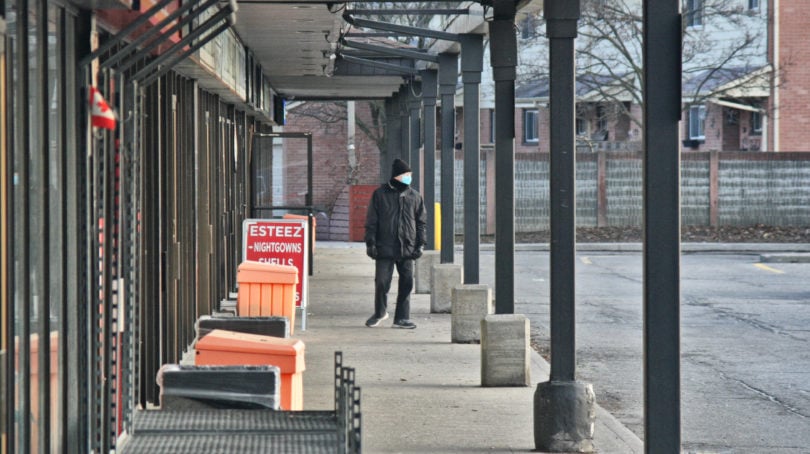 A man walks through an empty shopping plaza in Toronto on March 25, 2020 (Creative Touch Imaging Ltd./NurPhoto via Getty Images)

The first story in the collection Bullfighting by Roddy Doyle, the Irish author best known for clever novels like The Commitments, opens with two short sentences that resonate differently just now than they did when the book was published in 2011: “He walks. Every day, he walks.”

In the story, called “Recuperation,” a retired man called Hanahoe walks alone for his health. Doyle deftly conveys the way any walker’s mind might wander, often finding its way to unexpected destinations, even if the walk itself isn’t going anyplace special.

I see a lot more Hanahoes on sidewalks and curb-sides and pathways in my own neighbourhood during these pandemic days, and I guess it’s the same all over. I feel akin to him now and then, when I realize I’ve let my own musings drift as I stroll. If another solitary figure passes by, of any age, but particularly the older ones, I wonder where the lull of one foot after another has allowed that individual’s thoughts to stray.

Obviously, Doyle couldn’t have guessed when he wrote “Recuperation” that merely going for a walk would become the defining, arguably even unifying, activity of the testing times the world is now experiencing. That is, unless reading is, or maybe binge-watching. Between long walks, we need to find ways to pass the hunkered-down hours. And we’re indulging the impulse to trade around suggestions.

Early on, a fairly frequent response to the novel coronavirus was to share smartphone photos of certain dust jackets and paperback-novel covers on social media feeds. Images from editions of Albert Camus’ The Plague and José Saramago’s Blindness, all the way back to Daniel Defoe’s A Journal of the Plague Year, popped up in my feeds.

READ MORE: Can the forces of globalization ever hope to outlast the coronavirus?

Reading lists for trying to outlast COVID-19 lean heavily on these and other fictional accounts of even worse pestilences. There’s something about a good plague. The big novels on the theme often mine viral contagion for cautionary allegory, like the way Camus famously made infectious disease his stand-in for fascism. So, for readers inclined to look for political lessons in the pandemic, plague stories open up those societal dimensions.

But what about the personal, interior aspects of this, the novel coronavirus year? Take the ubiquitous terms “social distancing” and “self-isolation” out of the context of media briefings and public-health advisories, and these phrases point down some promising literary avenues—including the bland roadside route where Doyle’s Hanahoe trudges past seniors’ apartments, a kick-boxing studio, a Cadbury factory. It’s suburban terrain made for being distanced and isolated.

Looking back on the trajectory of the pandemic, the first sort of isolation that stands out is the solitude of the Cassandras who tried to warn us. They’ve been numerous enough. But first among them stands Dr. Li Wenliang, the Chinese physician who tried earliest of all to sound the alarm over a cluster of viral infections in Hubei province. Dr. Li voiced his concerns in an online chat room. (A satirist of wicked skill will be needed to capture the irony of using “chat” for what he tried to communicate.)

Dr. Li was dragged from his home in the dead of night by authorities who required him to recant. He contracted the illness later dubbed COVID-19 and died. A reader of Wislawa Szymborska reminded me the other day of her poem “A Soliloquy for Cassandra,” in which the late Polish Nobel-winner wrote, with the sort of audible plainspokenness that Doyle would appreciate, “I’m sorry that my voice was hard.”

Szymborska saw that the crucial part of any Cassandra story is how the prophesy must prove true very soon after being made. A long delay between the prediction and its fulfillment would ruin the effect. In Dr. Li’s story, the cruelty is sharpened by the abrupt turn from dismissed to vindicated. Szymborska’s Cassandra also doesn’t have to wait long to witness her own prophesy “burn like fire in the sky”:

Only unacknowledged prophets
are privy to such prospects.
Only those who got off on the wrong foot,
whose predictions turned to facts so quickly—
it’s as if they’d never lived.

Of course, Dr. Li is a twist in the ancient line of Cassandras. He did not survive to truly see his prophesies acknowledged, and his status switch from target of the state to hero of the news cycle. New poems will have to be written.

The suppression and isolation of a true voice is a singular injustice. By contrast, our routine social distancing and self-isolation is starting to feel like little more than inconvenience—and therefore undramatic. Still, as new habits of staying apart begin to shift from feeling unnatural to normal, literature about staying a bit apart takes on fresh significance.

Bookish people have to admit that the pandemic brought on a guilty tingle of expectation: plenty of time to read. An easy excuse—more than an excuse, an obligation—to refuse obligatory get-togethers. The self-satisfying prospect of small talk giving way to private thought. It made me revisit a poem by Philip Larkin, “Vers de Société,” from his 1974 book High Windows, which wrestles with that inclination to keep to oneself.

Larkin’s poem starts with an unwanted invitation: “My wife and I have asked a crowd of craps/ To come and waste their time and ours: perhaps/You’d care to join us…” Naturally, his answer is no. He moves on to sketching an appealingly self-contained reader, who sits under a lamp, stealing occasional glances out the window to admire the “air-sharpened blade” of the moon.

But it’s not so simple. “Funny how hard it is to be alone,” he writes. He strips bare the self-deception in that image of the smug, contented, lone reader. Nearer the end of the poem comes another killer line, again composed around the word “alone”: “Only the young can be alone freely.” And that invitation to a dull party? In the end, it’s accepted gratefully after all.

The difference between being alone when you’re young and when you’re old is a distinction worth holding onto as we brace for the crazy weeks and months ahead. The scarring sadness of this pandemic is shaping up to be the way old people will have to stay apart, and not at all freely, too often to die without the proper company and comfort of friends and family.

But most of us will live, even the old. I wonder what we will remember as the common distinguishing motifs of these long months, the patterns that will have to be included in any future writing about the experience. A good bet is that walking, either alone or in couples, three at most, giving others wide berth, will figure in a lot of memories.

We’re doing it to stay limber, to fend off cabin fever. But, as Doyle reminds us, walking isn’t really so simple as that. “Recuperation” ends with a sudden downpour that prompts Hanahoe to duck into a bus shelter. A girl of eight or nine is waiting there for her mother to get off work.

As I reread the story, I naturally pictured the senior citizen and the schoolgirl keeping the requisite six-foot social distance between them. As they would anyway. They aren’t entirely disconnected, though. Showing off his celebrated ear for Irish dialogue, Doyle gives us their weightless back-and-forth, up to the point when Hanahoe sees that the rain has let up:

And then the old guy with his heart problems walks off thinking that the girl was a nice kid. For her part, she is so contentedly self-possessed that it’s impossible to imagine her giving him a second thought. In their moment of parting, no reader could doubt Larkin’s point that it’s hard to be alone, unless maybe if you’re young.