Nick Hunt retraces the steps of a storied 20th-century explorer 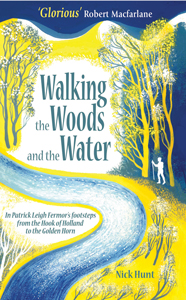 WALKING THE WOODS AND THE WATER

In December 1933, an 18-year-old Englishman by the name of Patrick “Paddy” Leigh Fermor set off to walk the width of Europe, from Rotterdam to Istanbul. He packed little more than some clothes, several letters of introduction and the Oxford Book of English Verse—to live “like a tramp, a pilgrim, or a wandering scholar.” It was a time before the horrors of fascism and Soviet-style Communism had taken hold, and much of Eastern Europe was still semi-feudal. (While he spent many nights in barns and shepherds’ huts, Paddy also enjoyed the hospitality of castle-dwelling counts and barons.) The accounts of his adventures, the lyrical memoir A Time of Gifts, and its sequel, Between the Woods and the Water—both elaborate love letters to a pre-war Europe—won him international acclaim.

Hunt was also 18 when he discovered Paddy’s travelogues and, before he’d finished reading them, “knew with absolute certainty that one day [he] would follow in [Paddy’s] footsteps, retracing his route through Holland, Germany, Austria, Slovakia, Hungary, Romania, Bulgaria and Turkey, in search of whatever was left of wildness and adventure.” And so he did. In December 2011, Hunt left his own London home and, for the next 221 days and 4,000 km, undertook his own pilgrimage: “Beyond buying roadmaps and putting out calls for accommodation, I deliberately did no research into where I was going,” Hunt writes of his preparations. “Paddy’s books, eight decades out of date, would be my only travel guide. With his experience underlying my own, I would see what remained of hospitality, kindness to strangers, freedom, . . . the mysterious, the unknown, the deeper currents of myth and story I believed—or longed to believe—still flowed beneath Europe’s surface.”

On an oft-perilous trip riddled with obstacles not seen in Paddy’s time—hydroelectric dams, industrial wastelands and multi-lane highways—and despite injuries that sometimes laid him up for weeks, Hunt prevailed. “In every country of my walk,” he writes, “I encountered kindness and generosity that Paddy would have recognized.”

Is is when recounting that generosity— from the strangers who invite him into their homes, to the colourful characters who, over beer, fruit brandy or tea, reveal their grievances, prejudices and aspirations—that Hunt’s writing shines brightest. And while his descriptions of landscapes can occasionally feel as plodding as his pace of travel, some are downright breathtaking. Atop the Balkan mountain range in Bulgaria, he writes, “Here and there, the green skin that covered the mountain had pulled away, as if tugged back by giant fingers, and jumbled rock burst out like sausage meat.”

Overall, Hunt makes an enormously appealing narrator and guide on the road less travelled: curious, sharp-eyed, insightful and intrepid—not unlike his predecessor, who died at the age of 96, just six months before Hunt began his trip. Sadly for Hunt, it was before he could send the letter he planned to write “to tell him I was on my way.”