REVIEW: Ways of Forgetting, Ways of Remembering: Japan in the Modern World 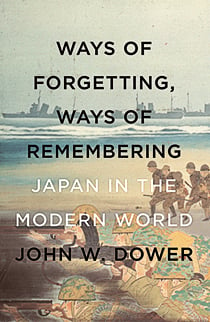 These 11 essays by an eminent American scholar of modern-era Japan are dedicated to the basic historical principle that the focused gaze is simultaneously an averted gaze. Dower magisterially sifts through what Western historians have emphasized—and ignored—in their examinations of Japan’s roller-coaster ride from feudal backwater to military power to defeated nation to industrial superpower. He finds a lot to irk him, particularly the tendency to misuse the Japanese experience in contemporary political debate.

In a New York Times op-ed piece, published only months before the 2003 invasion of Iraq, Dower responded to the war hawks’ assertion that the “pro-American reorientation” of postwar Iraq would be as (supposedly) smooth as that of Japan after the Second World War. Dower argued persuasively—well, for some readers, that is; the historian allows that his points, “fell like water on stone” with his own government—that the factors allowing for success in Asia were all missing in the Middle East, including, most crucially, Japanese acceptance of the legitimacy of the occupation. His most prescient comment? In a seven-year occupation, there was not one instance of Japanese terror against Allied soldiers: “Does anyone really imagine this would be the case in an occupied Iraq?” U.S. officials might also have profited from Dower’s 1995 article discussing the now-forgotten orgy of looting in Japan during the weeks-long vacuum between surrender and the “belated consolidation of authority” by occupying troops.

Another essay offers a visually stunning discussion of Japanese wartime propaganda, which included martial themes on textiles: the Japanese “could literally wrap themselves in aestheticized patriotism.” There’s a 1975 essay restoring to memory, as a pioneering Western historian of Japan, the Canadian diplomat E.H. Norman, hounded to suicide in 1957 by McCarthyite pressure, and an article on the ignored parallels between the experiences of Southeast Asians under Japanese attack in the 1940s and U.S. assault in the 1960s. They all add up to a superb instance of the historian’s craft at its best.