Review: We Killed: The Rise of Women in American Comedy 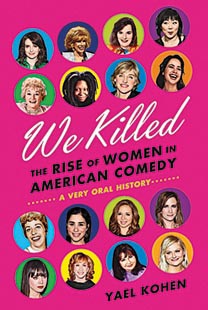 Some questions are inherently annoying: are we there yet? Is that seat taken? Are women funny? But is it better to ignore or engage with the children/moviegoers/magazine columnists who ask them? Marie Claire’s Kohen could not resist the urge to take on that last one, infamously explored by Christopher Hitchens in a 2007 Vanity Fair essay. Or rather, Kohen lets the women (and their male colleagues) answer.

We Killed, billed as a “very oral history,” stitches together interviews with comedians like Phyllis Diller (among the first funny ladies who wasn’t expected to also sing and dance) and closes with comics like Sarah Silverman (whose pretty-faced dirty talk has inspired a glut of copycats), and documents the highs and lows of the 60-odd years in between. When Saturday Night Live debuted in 1975, it created some of the earliest spots for female performers and writers on a sketch comedy program, but was considered an incorrigible boys’ club for decades (Molly Shannon’s armpit-smelling Mary Katherine Gallagher character was the beginning of the end of that). Merrill Markoe was one of the first female head writers on a late-night show, inventing the “Stupid Pet Tricks” segment for David Letterman. After their romantic relationship ended in the friction of working together, she left the show. And so on.

Is it helpful to ruminate over the prejudices that female comics have stared down? Some, like superstars Tina Fey and Amy Poehler, who declined to be interviewed for We Killed, may feel they are finished giving air time to annoying questions, and would prefer to just get on with making millions. Fair enough. But it can be easier to know yourself when you know where you come from, and comics are at their funniest when they are being completely authentic—L.A. comic Tig Notaro’s recent set about her breast cancer diagnosis is a fine example. And what doesn’t kill you makes you stronger. Or at least kills at the comedy club.