Charlotte (Kristin Davis, second from the right), on the popular TV series Sex and the City, adopted a baby girl from China.New Line Cinema/Everett Collection

After China legalized foreign adoption in 1993, the sight of adorable Chinese girls with their proud Western parents became commonplace. The fact that 120,000 Chinese children, almost all girls, would grow up far from their homeland was framed in happy supply-demand terms: a daughter surplus in one hemisphere filling the needs of would-be parents in another; a child denied a home united with a family eager to provide one.

Now a stunningly candid new book, Message From an Unknown Chinese Mother: Stories of Loss and Love, illuminates the unexplored side of that equation: the plight of Chinese women who give their daughters up for adoption. And that arithmetic is far more complex and brutal, the journalist Xinran writes: “a black hole in the woman’s heart and unanswered questions in her daughter’s.”

The Beijing-born Xue Xinran, who writes under the pen name Xinran, is known for giving voice to Chinese women—first on her radio program in China that aired from 1989 to 1997, when she moved to England, and more recently via her Guardian column and books, notably The Good Women of China. After that collection of real-life stories was published in 2002, Xinran was flooded with letters and videos from adopted Chinese girls and their families, she says on the telephone from her home in London. Many of the letters punctuate her new book.

The dialogue took on new intensity in 2004 when she founded the charity Mothers’ Bridge of Love for British families who adopted Chinese children. It provides cultural resources for adoptees and also acts as an advocate for special-needs orphans in China.

The book profiles 10 diverse women—educated urban dwellers, rural peasants, midwives, orphanage officials. The extreme variations in their circumstances is revealing in itself: no neat narrative exists to explain the off-loading or routine murder of Chinese girls. But these gut-wrenching, often perplexing stories do make clear that it’s simplistic to blame the one-child-per-family rule imposed 32 years ago to slow China’s population growth. What the edict did expose—and even exacerbate—was centuries-old discrimination against women. Murdering newborn girls—”doing” them, as it’s colloquially known—has been routine in farming communities for centuries, Xinran discovered. Crudely put, investment in girls doesn’t pay off: they aren’t as physically strong as boys, nor are they expected to support their parents in old age.

Equally entrenched, even now, are cultural biases that “good women” give birth to male heirs and having a female child first is a “calamity”—thinking that has created a profit centre for orphanages and midwives who run rackets promising they can ensure a baby will be a boy.

Xinran writes of visiting a family in rural Shandong when a woman was giving birth to her first child; soon after she saw the arm of the newborn girl sticking out of a slop pail. To her shock, two local policemen present did nothing. “It’s not a child,” the midwife told her. “Girl babies don’t count.” Killing her was a kindness, the woman said: “Officials don’t give us any extra land when a girl is born, so girls will starve to death anyway. Women suffer.” Two years later, the baby’s parents visited Xinran when they came to the city for work; the wife had given birth to two more girls, both given up for adoption by her father-in-law. Her “heart is sick” for her lost girls, the woman said, asking, “Do you think the foreigners know how to hold my baby?” Yet she also said she wanted a boy.

An affluent young woman who became pregnant during an affair with her university professor expressed being torn in different terms. She resisted her parents’ demand she have an abortion but allowed her daughter to be adopted by Americans, hoping she’d be reunited with her when she went to university in the U.S. Now living in the U.S., she’s always looking for her daughter, while knowing she’d never do anything to break up the girl’s new family. 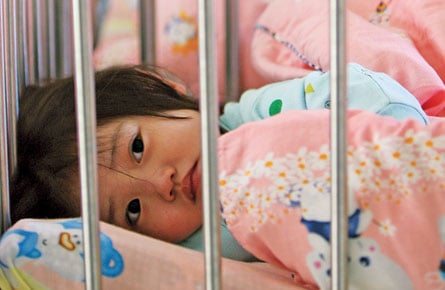 Xinran, who is 52 and the mother of a son, weaves her own story through the narrative to powerful effect. Born in 1958 to a mother who put the Communist party first, she never fully felt herself “a daughter,” she writes. Raised by her grandmother until age five, she was reunited with her family briefly before the Cultural Revolution of 1966, which saw her parents imprisoned for a decade. As a journalist, she tried in vain to help abandoned girls. Once she tried to foster a baby whose mother had died in childbirth and whose father had committed suicide, but was forced to hand her over to a poorly supplied orphanage. Arriving to visit one day, she found it closed; the children had been redistributed. When asked about the fate of these girls, Xinran falls silent. “I can’t talk or I will start to cry,” she says. “We would find them a family but according to Chinese law we had to sign a paper that we don’t have any rights to see them or have any information. That is really painful.”

Such compassion could explain her extraordinary skill at getting women to share intimate details of their lives. An orphanage official who had her first child, a girl, at age 42 reveals she pulled strings for the girl to be adopted by an American family. Orphanages routinely encouraged women to abandon girls, the woman explained: “They’ll be valued emotionally and physically a thousand times more if they’re adopted abroad.” She believed her own girl would be given a better life, not mentioning how much she was paid. But immediately after handing over her daughter, she regretted it. The next day she returned, to watch her daughter being taken away. Five years later, she was grief-stricken watching a video of the girl sent by her adoptive family: “I want to know why my Chinese mommy didn’t want me,” the girl said. “Was it because I was a bad girl?”

Xinran also makes what should seem an obvious connection between the country’s high female suicide rate and the one-child edict that favours boys. China is the only country where more women kill themselves than men, she writes, a fact usually attributed to poverty or marital discord. But the tragic tale of a dishwasher at Xinran’s local café reveals more nuanced motivation. Twice, the woman tried to kill herself by drinking cleansing liquid, thinking it was pesticide. Later she revealed she’d given birth to two girls who were drowned. Seeing girls in the café joyfully celebrating their birthdays provided a glimpse of the fact that little girls don’t have to suffer. It devastated her.

The book also reports on backstage machinations and corruption, specifically the disconnect between the official version and reality. The government officially prohibited discrimination against girls in 2001, but the price Chinese residents paid for an orphan suggests otherwise: $1,300 to $6,500 for a boy, $25 to $39 for a girl. In 2006, the government clamped down on foreign adoption after stories of abuse and mistreatment of orphans appeared in Western media. Officially, new applications aren’t accepted; only special-needs children, who are difficult to place, are up for adoption. Yet a market in stolen children, particularly for boys, exists, Xinran says. “Every year, 20,000 children go missing.”

Though economic reforms have changed attitudes in cities, the situation in rural communities remains entrenched, says Xinran, who notes gender-selective abortion, even among educated woman, remains a “huge public secret.” She recently met with a group of female journalists in Singapore who cried telling her they were pressured to deliver a son: “They said, ‘You lose your power in the family.’ I was shocked.”

The author expresses skepticism over the Chinese government’s invitation to thousands of foundlings for “root-seeking” tours in 2009, in which Chinese adoptees were showered with presents, dumpling demonstrations and puppet shows. “I think the government is trying to clean up a Mafia business but I don’t think they know how to do it,” Xinran says. Record-keeping is particularly bad, she notes, with many “official” documents being forged. Her charity militates for better record-keeping. She writes of mothers wanting to provide their children with legacy mementoes when they give them up for adoption: some write letters to their babies on their clothing; others leave their fingerprint in blood. But orphanages routinely toss the clothing out.

She says she once purchased cameras so that orphanages could photograph personal effects left with foundlings for their records. But when she returned, she was told the cameras had been “lost.” “They laughed at me,” she says. “They said, ‘You are silly. Westerners want something like McDonald’s—all shiny and new. They don’t want dirty old rubbish.’ ”

But what Westerners want doesn’t propel her, Xinran says: “I honestly don’t care if the West understands or not. My writing is for the Chinese. I want a new generation to understand what’s happening in China—in the history, in the countryside, how those women never had a chance to speak out or knew how to speak out. We have to talk about it. Otherwise, it’s so unfair for those women.”