What ever happened to Al Capp? 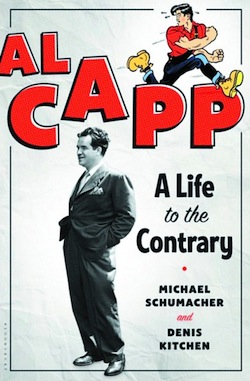 For decades, Al Capp was the most famous comic-strip artist in America, and Li’l Abner, with its dumb hillbillies, biting satirical humour, and ludicrously sexy women, was the most popular strip in the newspapers. By the end of his life, his artistic and personal reputations were in ruins; today he’s mostly a footnote in the history of comic art. What happened? Michael Schumacher and Denis Kitchen, who have written biographies of other pioneering artists such as Will Eisner and Harvey Kurtzman, attempt to explain Capp’s importance, and also convey why his downfall—including accusations that he sexually harassed college students—was such a shock.

The book leaves no doubt that Capp looms large in the history of comics. Before the former Alfred Caplin started drawing Li’l Abner, most comic strip artists were relatively anonymous figures. Capp worked to make himself as popular as his title character: with his pugnacious wit and wooden leg, he was known to people who weren’t even readers, and his bitter feud with Joe Palooka creator Ham Fisher—culminating in the latter’s suicide—became big news. After he became an arch-conservative in the ’60s, he had a famous confrontation with John Lennon and Yoko Ono, where he introduced himself as “that dreadful Neanderthal fascist.” He also was a pioneer in the field of merchandising, figuring out how to make a fortune from product tie-ins and a new character, the Shmoo, who became a worldwide sensation.

What Schumacher and Kitchen don’t always succeed in conveying is the artistic, as opposed to commercial, impact of Li’l Abner. They mention some of the strip’s innovations, such as the combination of comedy with serialized storytelling, and Capp’s parodies of other comic strips (including the long-running Dick Tracy takeoff “Fearless Fosdick”), but there are relatively few examples of the strip, and not much suggestion of whether it still holds up. They do succeed in offering a balanced portrait of Capp, as a man whose artistic ambitions belied his statement to Lennon that “I draw my cartoons for money,” and who opposed censorship as furiously as he opposed hippies.