What is European soccer's recipe for success? Money.

No salary caps and no draft picks. It is the rich against the richest 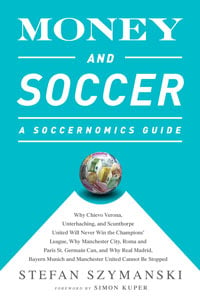 North American conservatives and Real Madrid fans alike can rest at ease. Money and Soccer is not a salvo from the sidelines of a sport viewed by NFL-loving Americans as vaguely socialist; nor is it the equivalent of baseball’s Moneyball, which offered a recipe for low-budget clubs to outcompete the world’s richest teams. Marshalling a staggering amount of data, Szymanski has a clear message: It takes money to become champions—lots and lots of it. In North America, professional hockey and football leagues aspire for some sort of parity. In European soccer, there are no salary caps or draft picks. It is the rich against the richest.

In fact, it’s arguably hard to find a more purely capitalist sport right now, and Szymanski, a professor at the University of Michigan and co-author of the bestselling Soccernomics, gets into the finer details of the business of soccer: funding a new stadium (Arsenal’s cost more than $10,000 per seat), why so many clubs run into debt problems, and how many teams—even those in the top league—go bankrupt. Pro soccer, he argues, is financial speculation, and soccer managers are like pension-fund managers picking stocks, i.e., the players. To be among the world’s best, Szymanski makes clear, “what matters is that you spend more than your rivals.”

And the cost is rising considerably. Money and Soccer focuses primarily on the English Premier League, not because it’s the most-watched on Earth, but because it kept the most complete financial records. In 1994, Manchester United doled out $18 million in wages for its championship squad. Its 2013 team, however, cost $293 million to finish atop the league. So how did once-middling clubs such as Chelsea and Manchester City crash the party of soccer’s elite? When Russian oil tycoon Roman Abramovich bought Chelsea in 2003, he demonstrated a willingness to lose millions to create a winning team. The same goes for Manchester City, and the virtually endless wealth of owner Sheikh Mansour of the U.A.E. Owning a great soccer club isn’t often great for a return on investment. As for prestige, there’s nothing quite like it.

For the average soccer fan who longs for a team—like Rochdale in England’s third-tier league—to one day be crowned Champions League winner, there may be one answer: Pray for a wealthy man to take an interest.