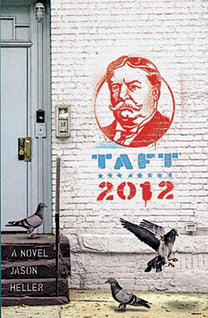 William Howard Taft, the last mustachioed president of the United States, is said to have been good at everything he did in life, other than running the country. The Cincinnati native, who weighed in at well over 300 lb., was so ineffectual in office that his one-time champion Teddy Roosevelt actually re-entered politics to run against him as a third-party candidate in 1912.

In the American writer Jason Heller’s slapstick debut, Taft gets a second chance. The real-life former president went on to a fruitful post-politics career. In Taft 2012, he instead disappears after his successor Woodrow Wilson’s inauguration, only to re-emerge a century later having been frozen the whole time beneath the White House lawn. It’s an absurd premise, and Heller labours pretty hard to establish it. As a result, the book doesn’t really begin to flow until almost midway through. After meeting up with his great-granddaughter, an independent congresswoman, Taft embarks on a national tour and later a presidential campaign. Along the way, he enjoys a sexual tryst, punk music and massive quantities of food, while learning to hate the book’s nominal villain, a spooky agribusiness giant.

Taft 2012 is a clumsy book. The dialogue is overwhelmingly expository and the joke of having Taft react with confusion to every sign of modern life grows old rather quickly. (My tipping point was his reference to “a singer named, what was it, Michael Jackman?”) For all that, it’s a charming read. Taft 2012 taps into a particular American desire for a different kind of politics and does so in a breezy, if morally simple, way.