For biographer Walter Isaacson, Leonardo's breadth of interests would have led him embrace the Internet age 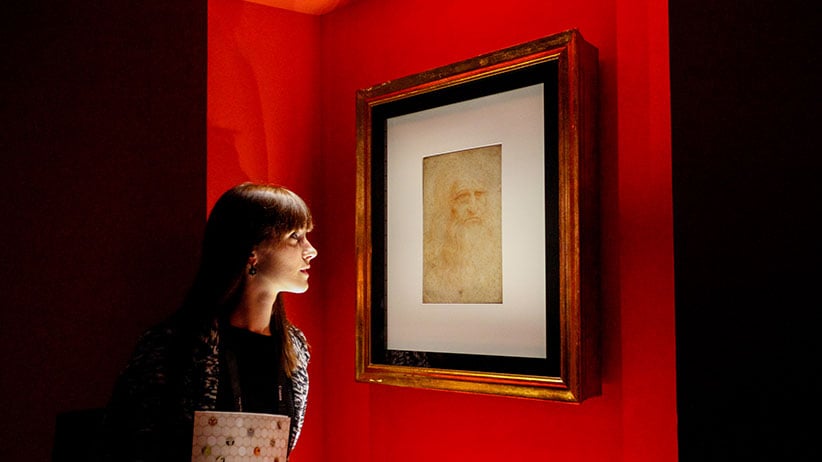 On occasion of the Holy Shroud Exposition, in the Senate Hall, Palazzo Madama, from April 24 to June 2, 2015 has exposed the self-portrait of Leonardo Da Vinci. The drawing shows a thoughtful and senior face of Leonardo. (Elena Aquila/Pacific Press/LightRocket/Getty Images)

Currently a professor of history at Tulane University, and a past CEO of the Aspen Institute, chairman of CNN and editor of Time magazine, Walter Isaacson has spent much of the past two decades writing big biographies of big men. His books to date include Einstein: His Life and Universe; Benjamin Franklin: An American Life and Kissinger: A Biography. His 2011 biography of Steve Jobs, published days after the Apple co-founder and CEO’s death, became an international bestseller. His latest, titled simply Leonardo da Vinci, is his biggest yet both in terms of its subject and sheer mass: weighing over three-and-a-half pounds, it features colour plates printed on sumptuous glossy stock throughout. Using as its starting point the 7,200 pages of surviving notebooks written in Leonardo’s famous mirror script—Isaacson calls them “the greatest record of curiosity ever created”—the biography moves chronologically from Leonardo’s illegitimate birth in the small Tuscan town of Vinci to his artistic triumphs in Milan and Florence, where for a time he worked under the patronage of the ruthless tyrant Cesare Borgia and also found himself in frequent competition with the moody and ill-tempered Michelangelo.

Isaacson spoke to Maclean’s about his lifelong fascination with the man whose interests and accomplishments seemed to know no bounds, encompassing the worlds of theatre, music, painting, weaponry, anatomy, theatre, flight, medicine, dentistry and geology. A man who could as easily engineer the draining of swamps as paint the Mona Lisa.

Q: The term “Renaissance Man” has been flung at your previous subjects—Einstein, Jobs, Franklin. Leonardo is the only one who doesn’t need quotes around the term. Was this book an attempt to go to the source?

A: Having spent a life looking at people who combine beauty and engineering, art and science, I wanted to do the ultimate—the person whose Vitruvian Man, the drawing of the man in the circle in the square, is a symbol of absolute beauty but also precise science. We often categorize ourselves as people who love science or people who love the humanities. Leonardo had such a playful curiosity. If you read his notebooks, you’ll see he’s curious about what the tongue of a woodpecker looks like, but also why the sky is blue, or how an emotion forms on somebody’s lips. He understood the beauty of everything. I’ve admired Leonardo my whole life, both as a kid who loved engineering—he was one of the coolest engineers in history—and then as a college student, when I travelled to see his notebooks and paintings. 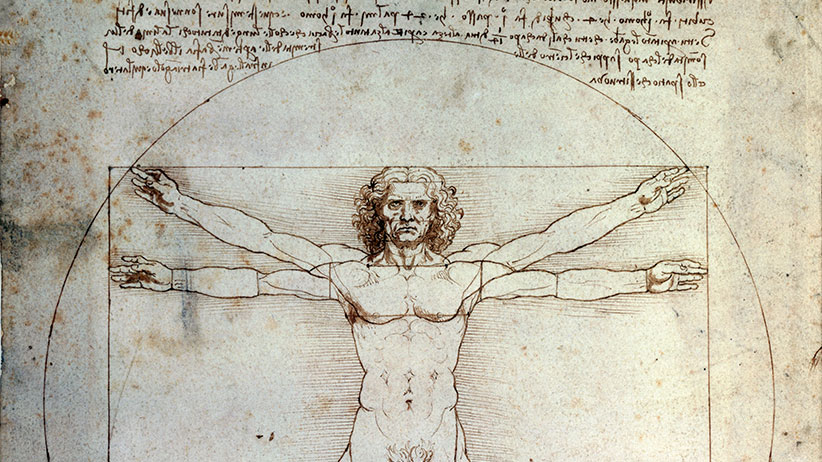 Q: Some of the book is written as art history—any background there?

A: I’ve tried to be like Ben Franklin and Leonardo my whole life and immerse myself in art and history and science and technology. The great lesson you learn from these men is don’t think in silos, don’t think in disciplines. Look at the patterns and crosscurrents across nature, which are really beautiful. One of the secrets of Leonardo’s genius was that he made no distinction between art and science.

Q: And yet today’s world increasingly forces that distinction.

A: Yes, we force that distinction on ourselves, or, worse yet, on our children; we make it so it’s less possible to be imaginative and creative. Leonardo loved math projects—like how to square the circle—but he also loved music. He designed more than a dozen new musical instruments, and that involved knowing how sound waves work.

Q: Leonardo set for himself “nothing less than knowing fully the measure of man and how he fits into the cosmos.” That’s no small task; some might call it a hubristic one…

A: We relate to Leonardo because his genius was just being passionately curious about everything. He wanted to know everything he could know about our universe, including how we fit into it. We can’t all have a superhuman intellect like Einstein’s, but we can be super-curious. And we can also quit smashing curiosity out of the hands our children.

Q: Writing this so soon after your Jobs book, did you find yourself speculating about how Leonardo would have fared in the Internet age?

A: Leonardo was lucky to be born the same year that Gutenberg opened his printing shop. As a young person, he could get information about whatever struck his curiosity. The Internet is to our age what Gutenberg’s press was to his, so he would have loved being alive today.

Q: Although you point out that he didn’t implicitly trust what he read.

A: He always asked, “How do we know that? Let’s test it by experiment.” That’s another thing we can learn from Leonardo, that we should always question received wisdom, especially in the age of the Internet.

Q: He was spiritual but not particularly religious. Did that natural skepticism help his work?

A: Who knows which was the cause and what was the effect? He tested the theory that the biblical flood caused the fossils to be deposited the way they were, and he decided no, they must have been deposited in layers over many, many centuries. Likewise, he studied the human fetus in the womb and figured out when was it viable. So he did not take received wisdom—whether from ancient classical thinkers or medieval scholars or from the Bible—without questioning it. And this was the beginning of the scientific method. This is another lesson for our time: that when we have evidence that contradicts a certain belief, we should be willing to change it. I think this made Leonardo, in some ways, a person who better understood the beauty of God’s creation than a person who just takes all received wisdom from the Bible on faith. Looking at Vitruvian Man, a few things strike you. First, it’s Leonardo looking at himself in a mirror and also in the universe. Second, it’s a work of precise scientific observation—he made more than 200 measurements of the human body to get it right. Third, it’s a work of unnecessary beauty. His friends were doing the same thing, but they were drawing stick figures. Leonardo’s is a beautiful man and a beautiful piece of art. The reason he drew it was because an ancient Roman architect had described how the proportions of the church ought to mirror the proportions of a man, so it’s scientific, artistic and spiritual all at the same time. And being a self-portrait, it’s also Leonardo looking at how he fit in, not only to the world, but also to the spiritual world.

Q: Steve Jobs had an explosive personality, as did Leonardo’s rival, Michelangelo. Leonardo doesn’t seem to fit the trope of the brilliant-but-temperamental creator. He was an all-round decent guy but also had a “beauty beyond description.”

A: Yes, Leonardo was very cute. Sometimes he was brooding, maybe even depressed, but usually he was exuberant and playful and happy. He had an extraordinary number of friends because he was a deeply kind person.

Q: And he was comfortable and open with his homosexuality as well.

A: He was comfortable being illegitimate, gay, a misfit, a heretic. But he also respected other people. He didn’t get into disputations. He was a genius but he had a certain humility. In his notebooks you see lists of people he wanted to grill about things like how the water diversions in Milan work; he was always interested in learning from other people.

Q: You make a number of suggestions for how we can “learn from Leonardo.” One is to “get distracted,” to wander off on tangents, but many feel an increasing distractibility is one of our weaknesses as a society.

A: I think Leonardo teaches us the value of both being focused on things that fascinate us but also, at times, being distracted and deciding to pursue some shiny new idea that you happen to stumble upon. Balancing intense focus with being interested in a whole lot of different things is something that we have to do in the Internet age.

Q: You compare Leonardo to Jobs several times in the book. Is Leonardo more like Jobs than Einstein? or Franklin?

A: No, I think Leonardo and Ben Franklin share the most. They both looked at every field of endeavour, from science to music to writing. They both loved certain patterns of nature, like whirlwinds. That interest helped Ben Franklin discovered the Gulf Stream and helped Leonardo both in his art and to explain why the heart valve closed. I think there’s a close connection between Franklin and Leonardo, although Leonardo was an even greater genius. The great connection between Steve Jobs and Leonardo is that both realized that the beauty of engineering and the beauty of nature are indistinguishable.

Q: Which of your subjects has impressed you the most within the context of his time?

A: I waited until the end of all these books, almost the end of my writing career of big books, to culminate with Leonardo because I find him the most creative genius in history. He has all the attributes of a Ben Franklin or a Steve Jobs, but he’s the one you’d most want to be around, because he was nice, he was curious, he was observant, and he was interested in everything.

Q: What astonished you most about a subject who seems to provide an endless list of astonishments?

A: In general, just the breadth of his curiosity. Every week there were a thousand things he was curious about that he would jot in his notebook. But I never knew what a great anatomist he was. He understood exactly how the human heart works, for example. I also didn’t realize how important the theatre and pageants were to his imagination. In the early part of Leonardo’s career his main job was producing theatrical performances and big public pageants, and that’s when he started designing flying machines, not for transportation, but to transport our imaginations. Whether you’re looking at the Last Supper, which is a truly dramatic narrative scene done in theatrical fashion, with the perspective of the stage, or whether you’re looking at his flying machines, you realize the roots of it come from his love of the imagination and of the theatre. In a more fundamental sense, this helped him learn the importance of blending fantasy with observed reality.

Q: Leonardo produced a surprisingly small number of paintings, fewer than 20. Do you have a favourite?

A: The Mona Lisa, to me, is the greatest emotional painting ever done. The way the smile flickers makes it a work of both art and science, because Leonardo understood optics, and the muscles of the lips, and how light strikes the eye—all of it goes into making the Mona Lisa’s smile so mysterious and elusive. Of his less-famous paintings my favourite is Lady with an Ermine. The Duke of Milan, or somebody, has surprised them, and we see the emotions on their faces, which I think are exciting and beautiful.