Whatever happened to 'the art of dress'?

Once upon a time, American women had taste and knew how to dress, argues Linda Przybyszewski in 'The Lost Art of Dress'. What happened? 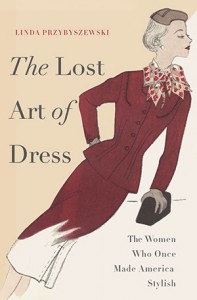 THE LOST ART OF DRESS: THE WOMEN WHO ONCE MADE AMERICA STYLISH

In 1916, representatives of the U.S. General Federation of Women’s Clubs met in New York for a convention at which they bemoaned “their unfortunate slavery to the vagaries of fashion and style”—and wondered if there might be a way to liberate women from the costly caprices of the American fashion industry. The answer came in the form of a revolutionary (albeit short-lived) movement to standardize women’s street wear. By 1917, groups of intrepid American women had banded together, pledging to wear the same simple dress style, day in and day out. This, writes Przybyszewski, amounted to “a mutual non-aggression pact among women regarding fashion.”

It’s one of the many delicious tales contained in The Lost Art of Dress, a history of women’s clothing in 20th-century America. Przybyszewski (a historian and “prize-winning dressmaker”) argues that, once upon a time, American women had taste and knew how to dress. What happened?

The book is, in part, a catalogue of rapidly changing fashion trends: Skirt lengths go up and down; sleeves flare in and out; hats go on and off (and on again?). But it is much more about the women behind the sewing patterns: the teachers, scientists, designers and writers who staffed university home-economics departments across the country. Indeed, one particularly fascinating chapter concerns the rise of “home economics” as an academic discipline: beginning in the 1860s—and continuing through the 1920s, when the U.S government set up its own home-economics unit to nurture the science of “homemaking” and mobilize women behind the cause of sartorial frugality.

By the 1960s, however, the “art of dress” was losing ground to a reactionary women’s-liberation movement. Students at the all-girls Barnard College asserted their right to wear Bermuda shorts. Home-economics classes were scuttled. Dresses were ditched in favour of pants. We grew obsessed with polyester. “The results,” writes Przybyszewski, “were not pretty.”

The author clearly laments this move away from the tailored skirts of yore. But there is contradiction in her nostalgia. She also rails against modern fashion’s obsession with thinness and youth and cellulite-free derrières, yet she assumes that the end-goal of fashion is (or should be) to enhance a woman’s figure—and writes disdainfully of clothing that is artful but not figure-flattering, by which she essentially means slimming.

This writer—who read The Lost Art of Dress while clad in a rather unbecoming pair of cotton shorts—rather aspires to be like the ’60s-era feminists at whom Przybyszewski scoffs: women who viewed the relentless demands of modern fashion “as a sexist ploy to waste women’s time.”