When a 'genius' wrote a zombie novel 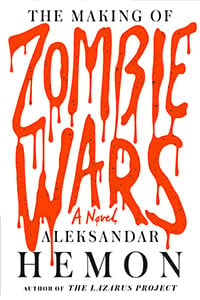 THE MAKING OF ZOMBIE WARS

Fans of Aleksandar Hemon’s previous work may be surprised to learn that the author has written a zombie book. That the winner of a MacArthur “genius” grant would write a novel whose cover design—with the words “Zombie Wars” illustrated in dripping blood—resembles a mass-market horror offering rather than the earnest aesthetic typical of most literary fiction says something impressive about Hemon’s range.

Of course The Making of Zombie Wars isn’t a typical zombie novel. The book follows Joshua Levin, a 33-year-old ESL teacher and aspiring screenwriter who lives in Chicago. Joshua leads a comfortable if boring existence: he has a girlfriend, and an idea for a movie. It’s called Zombie Wars, about the aftermath of a virus created by the government to transform immigrants into factory-working zombies. The virus spreads, and chaos ensues.

But Joshua’s own life soon descends into chaos, the result of an entanglement with his student Ana, a Bosnian refugee. What follows is a series of events featuring an eclectic mix of characters, including a vengeful fellow traumatized by the war in Bosnia, an ornery teenager, and Joshua’s landlord, an unhinged veteran of the Gulf War.

Sprinkled throughout are pages from Joshua’s Zombie Wars script. The would-be movie is funny in part because it’s overblown and slightly ridiculous, like any summer blockbuster. But while Joshua’s writing can be comically formulaic, Hemon’s retains his extraordinary deployment of the English language: Ana’s boss has “biblically dark eyes,” while Joshua’s writing-workshop leader has a forehead accented with “mandibular cleavage.”

Everything Joshua experiences, no matter how stressful or improbable, either reminds him of something in a movie or gives him an idea for a new one. He frequently imagines “a very small man hunched in the crawl space of his mind,” dutifully cataloguing his experience. That impulse to transform everything into a story—a way of processing experience—is a familiar theme in Hemon’s work.

But in both Joshua’s own story and his script, there’s a darker issue at hand, namely: horror. The book takes places during the invasion of Iraq in 2003—which occurs in the background, on TV screens—and the narrative overflows with those who’ve experienced war and suffering. Foreigners abound—including the zombies, those prototypical outsiders. “Good thing about zombies is you can kill [a] million and nobody cares,” remarks Bega, another displaced Bosnian. “You just shoot, they explode, nobody cares.”