When a journalist parachutes into the Aleutian Islands

A review of 'The Wind is not a River' 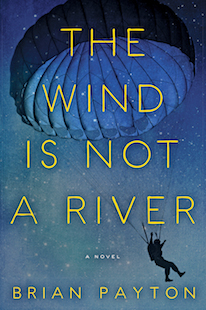 The Wind is not a River

Payton was a teenager when he learned about the war in the Aleutians—the string of islands that stretch like hopscotch squares between Alaska and Russia. In 1942, the Japanese captured two of them, Attu and Kiska, holding them for nearly a year. The Americans responded with aerial strikes and, ultimately, mounted a 2½-week ground assault that drove the Japanese out. This, the sole battle fought on U.S. soil during the Second World War, was largely kept secret from the American public and, to this day, little is known about it outside Alaska.

Payton wanted to change that, so he sent in a fictional proxy—38-year-old journalist John Easley, posing as a lieutenant with the Royal Canadian Air Force. The novel opens with Easley parachuting into the barren terrain of Attu after his plane is hit by anti-aircraft fire. It is April 1943, some six weeks before the U.S. move in, and Attu is crawling with more than 2,000 Japanese troops. Easley and the plane’s only other survivor, a young Texan named Karl, quickly join forces to find food and cover. They’re shrewd about avoiding detection and resourceful at living off the land, but each moment they remain alive feels miraculous.

The novel’s parallel narrative thwarts some of this suspense and, at times, even borders on cliché. Every other chapter focuses on Helen, Easley’s wife, who leaves the couple’s Seattle home and lies her way into a U.S.O. troupe so she can travel to Alaska in search of her husband. Though these scenes provide a reprieve from Easley’s bleak predicament, they also induce some anticipatory cringing. Helen seems to believe she can rescue Easley, and even the possibility of this plot development compromises the story.

The book’s best passages come with the Americans’ eventual arrival on Attu, in which Payton makes visceral the chaos, fear and utter unpreparedness of the U.S. Army. They “run between hills with pistols drawn, like clueless cops in a gangster film?.?.?.” They drag the wounded to and from the beach, exposing them to sniper fire. One soldier instructs Easley to report the following: “Tell them the Seventh Infantry Division trained in desert combat for North Africa, then got shipped to the opposite end of the world. Tell ’em they gave us s–tty clothes that don’t keep us warm or dry. Tell ’em they didn’t bring enough food and that no one seems to know what the hell they’re doing. But I guess nobody wants to read about that.”