REVIEW: When I left home 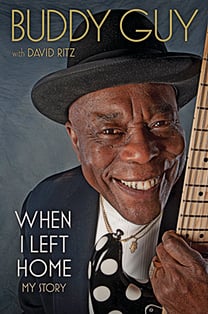 Buddy Guy’s name suggests he’s an everyman, and the singer, guitarist and bona fide blues legend comes across as something of a regular guy. In part this is what makes his autobiography so satisfying: he’s continually amazed and amused—as any music fan would be—by the musical giants who cross his path.

He’s also unstintingly devoted to the blues, which he first heard as a boy in the ’40s, picking cotton with his rural Louisiana family. At age 9, he made his first “guitar” from tin cans and string wires. At 20, he left home to try his luck in the clubs of Chicago. There, he met his idols; some (like Muddy Waters) helped his career; others (like Leonard Chess) took advantage of his naïveté, but he learned from them all and amassed some remarkable stories along the way. Related with long and (rather dubiously) exact quotes, they give the book a colourful, bawdy richness.

In unvarnished prose dotted with vernacular poetry, Guy relates his journey from rags to relative riches with the help of younger acolytes such as Keith Richards and Eric Clapton; along the way, he gives us the story of the blues as an art form and unstable, even dangerous, business.

He tells it like it was, not leaving out, say, Waters’s beating of women or his harmonica-playing musical partner Junior Wells’s violent drinking jags. And though he himself has walked a relatively straight path, he’s self-critical about his music, to the point of dismissing some of his recordings. One wishes he’d toot his own horn a bit more, especially about his recent slew of Grammy-winning albums. At the book’s end, Guy invites readers to visit his blues club in Chicago; perhaps there, he might open up about the making of the CDs he’s got for sale. He seems the type who would: not just an ordinary guy, but a dude.