Which Ten Commandments do you mean?

A review of 'The Ten Commandments: A Short History of an Ancient Text' by Michael Coogan 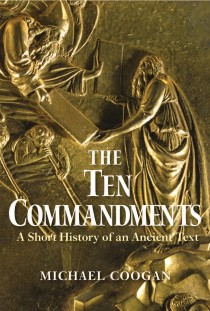 THE TEN COMMANDMENTS: A SHORT HISTORY OF AN ANCIENT TEXT

For a relatively few words that almost everyone in Western civilization thinks they know—at least the highlights—the commandments remain not just powerfully mysterious but confusing. Coogan, a lecturer at Harvard Divinity School, does a wonderful job in fixing the latter: Roman Catholics, at least those old enough to have memorized the Baltimore Catechism, can be puzzled by cryptic references in, say, a death penalty debate to the “Sixth Commandment” (You should not kill) and wonder what the prohibition on adultery has to do with lethal injection. Yes, the count varies by faith—the prohibition on murder is the Fifth Commandment for Catholics. Jews have one count, most Protestants and Eastern Orthodox have another, and the odd couple of Roman Catholicism and Lutheranism have a third. That matches the Bible’s own three versions, not that they line up neatly with any of the modern ones.

Nor, for that matter, do they prohibit killing. The verb in all three versions clearly means “murder.” Some of Coogan’s other translations are less familiar. Consider the Eighth Commandment (seventh if you’re a Catholic or Lutheran): it’s “You should not kidnap” in the author’s version, rather than “You should not steal.” Theft is forbidden in a later commandment, the one demanding you leave your neighbour’s property alone, Coogan notes, further adding that the commandments are listed from worst crime to least serious—meaning theft is out of place between murder and perjury. Since the same verb is used for what was a real danger in the Ancient Near East, the kidnapping of free men and their sale to passing slave traders—the fate of the patriarch Joseph at the hands of his own brothers—Coogan’s translation makes sense.

His main focus is on the Ten Commandments’ often contentious place in American public life, and the way some religious strictures have been tweaked to suit the state part of America’s civic religion. The Fraternal Order of Eagles sought to combat juvenile delinquency in the 1940s and ’50s by distributing copies of the commandments to the Boy Scouts and other civic groups. But their campaign really took off in 1956 when Hollywood mogul Cecil B. DeMille joined them, to garner publicity for his epic
The Ten Commandments, and paid for monuments all over America. Charlton Heston, the film’s star, turned up for the dedication in Dunseith, N.D., and posed for photos beside the monument—which also bears the Great Seal of the United States with its eagle, in complete disregard of the Second Commandment (or the First, depending): You should not make for yourself a graven image.