REVIEW: The Mormon People: The Making of an American Faith 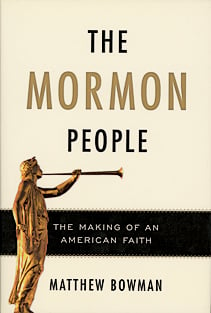 Polls recording the number of Americans who say they wouldn’t vote for a Mormon have held steady (at 25 per cent) for years, while the number who say the same about a gay person—now at 33 per cent—has been dropping. That raises the striking possibility that more Americans will soon be prepared to see a lesbian in the Oval Office than, say, Mitt Romney. Given that Mormonism is the all-American faith, the one religion rooted in the cultural DNA of the U.S. alone, the fact that so many Americans distrust and even hate it demands explanation. As this account by Bowman, a historian of religion who is a Mormon himself, makes clear, there is a lot of history between Americans and their native-born faith, much of it bloody.

Mormonism’s origins couldn’t have been more American. Its founding prophet Joseph Smith (1805-1844) grew up in northern New York state, known as the “burned-over district” for its fiery religious revivals. He was one of dozens of charismatic preachers of his day, all of whom, in Bowman’s lovely phrase, “heard the voices of angels outside their windows at night.” Even Mormonism’s bans on alcohol and tobacco are in the mainstream of 19th-century American Christianity.

But there are, of course, aspects well outside the norm too, including polygamy and, in the early days, a kind of communism. It was that last practice that brought the rapidly expanding faith into violent confrontation on the frontier, leading to Smith’s death when a mob stormed the Illinois jail where he was held, and leading also to the Mormons’ great trek westward, out of the U.S. to a new theocratic Zion in Utah.

Americans, who fought a bloody civil war over the integrity of their union, really didn’t like that. Eventually, Mormon Utah was brought within the U.S. and polygamy (officially) abandoned. Mormons began their enthusiastic embrace of free enterprise, patriotism (they are overrepresented in both the CIA and FBI) and apple-pie family values. But however American they may now feel, many of their neighbours have never quite agreed with them.

FILED UNDER: book review bookmarked Matthew Bowman The Mormon People: The Making of an American Faith