With the full force of his influence, and with help from friends, Gord Downie may help Canadians see the dark legacy of residential schools 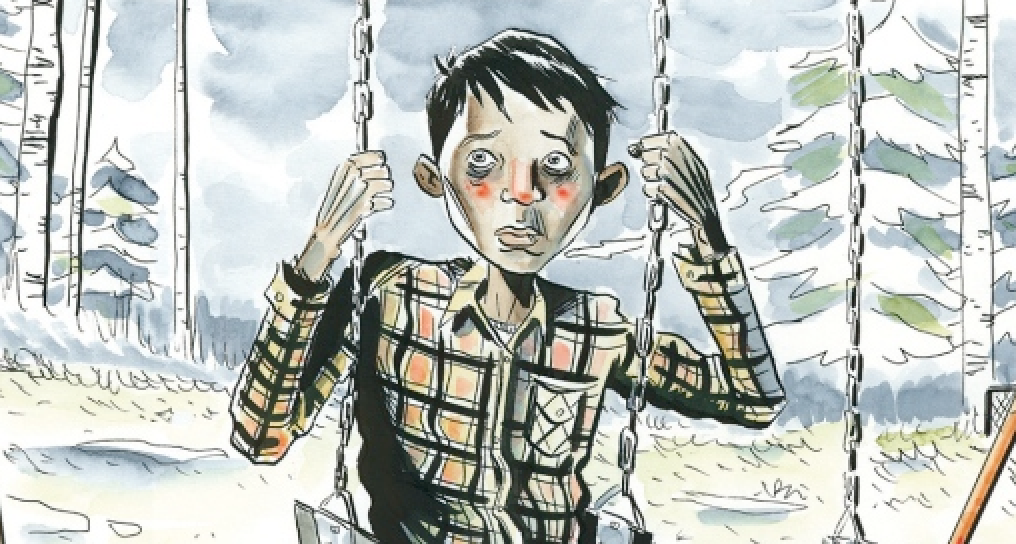 From Secret Path by Gord Downie with illustrations by Jeff Lemire

The most powerful stories are true stories.

Artists know this better than anyone, especially artists as accomplished as Gord Downie, Jeff Lemire and Joseph Boyden. The three friends—the Tragically Hip frontman, the renowned graphic novelist and the Governor General’s award-winning author—have dedicated themselves both independently and in combination to telling the true story of Chanie Wenjack, a 12-year old Ojibwe boy who died frozen and alone at the side of a railroad bed almost 50 years ago. He was trying to make his way through 320 km of northern Ontario scrubland to escape the horrors of life in a residential school and get back to the father he had been taken from.

“Chanie haunts me,” Downie declared week, as he announced Secret Path. It’s an ambitious multi-platform project that includes an album of solo songs from the singer, an 88-page graphic novel illustrated by Lemire and an hour-long CBC TV special—all committed to sharing Chanie’s story. Secret Path also follows in the footsteps of the Heritage Minute dedicated to Chanie that was released in July featuring Boyden.

The bet is that Chanie’s story, even a half-century after it was first documented in Maclean’s, has the potential to haunt others. Possibly, it might even reach an audience wide enough to resonate in ways that royal commissions and official reports frankly have not.

A well-told story, as these three master craftsmen know, can knock the wind out of you. It can snap you bolt upright and seize you with sudden conviction. How many Canadians remembered the missing persons’ death of Toronto Maple Leaf Bill Barilko until Downie sang of him in “Fifty Mission Cap“? How many more had their eyes opened to Canada’s early Indigenous history thanks to Boyden’s Bird family trilogy?

The sombre hope is that the stark, specific details of Chanie’s last seven days might, in the hands of such gifted artists, force attention and profile, helping Canadians to see the direct line that connects the tragic history of residential schools to the many failures that challenge our Indigenous communities to this day.

None of this comes about by accident. The three have long worked together directly and indirectly on issues related to Canada’s unreconciled relationship with First Nations. Although Downie and Lemire are declining interviews about Secret Path before its release, the comic book artist has, in the past, credited Boyden with introducing him to the many Indigenous communities that circle James Bay—just as the self-described “Scottish-Irish-Metis mixed blood” author of The Orenda did for Downie after they met in 2006.

“He opened up my eyes to a part of the province that I didn’t know but wanted to learn more about” said Lemire of Boyden in an interview given this past January. “Now I spend a lot of time there. I love its isolation. Its unique voice.” Boyden adds that Lemire has become accepted locally because he is, “always listening, absorbing everything like a sponge.”

For Downie and Lemire, time in Ontario’s north is no dilettante indulgence. With Boyden, and on their own, they’ve spent long periods in communities near Timmins, Moosonee and spots you won’t easily find on any map. They’ve learned to fish and trap and be accepted there as friends, not just celebrity ambassadors from south of the TransCanada Highway.

Unsurprisingly, their work has also been affected. With a third of Canadians watching, Downie interrupted the Tragically Hip’s final concert, pleading for the country to heal its broken relationship with First Nations. Two days later, Downie and the entire band joined Boyden for some fishing north of Timmins.

As for Lemire, he’s made the subject matter a staple of his recent work. In addition to Secret Path, Simon & Schuster is also publishing his new book Roughneck in April 2017. Within its pages we meet a half-Cree former NHL goon who struggles with alcoholism, an uncertain sense of where he fits into the world and a pained family history. These are not foreign subjects to many people in the James Bay lowlands. Even Lemire’s artwork for Secret Path, washed flat of colour and laced with long silent stretches, suits the geography and subject matter perfectly.

It’s a good thing. Because even artists as dedicated and talented as these will need every ounce of ability to get people to care. If that seems harsh, it’s only the truth. Whether it’s the absence of easy remedies, cultural and geographical distance or the sheer ugliness of past actions, most Canadians seem content to largely overlook Indigenous issues. It’s a subject that provokes plenty of lip service but much less real engagement.

Of course, this particular treatment of the topic will be unique—and for reasons more than just format. The story of Chanie Wenjack’s death comes in the shadow of Downie’s own diagnosis for glioblastoma, an aggressive and incurable form of brain cancer.

The emotion and attention that has greeted Downie since news of his condition was made public has been almost unprecedented. With an audience that’s never been larger and a platform that’s never stood higher, one gets the feeling that Downie knows exactly what he’s up to. He’s going to unleash the full force of his current influence to tell Chanie’s story as loudly as he can.

And because we know that the most powerful stories are true stories—and that these artists enjoy unique and honest talent—there is at least a chance that Chanie’s story will not only get heard, but that it will get action.