Why did the chicken cross the world?

Over history, chickens have become ‘the world’s most ubiquitous bird’ because of their usefulness 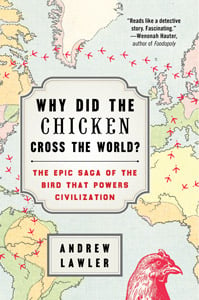 Why Did the Chicken Cross the World?: The Epic Saga of the Bird that Powers Civilization

Yet more depressing news that early risers truly do have more success.

An estimated 20 billion chickens are alive at any given time—more than three for every human. Chickens outnumber cats, dogs, pigs and cows combined; and only one country in the world, the Vatican, is chicken-free. So how did a bird that can trace its ancestry back to the skittish red jungle fowl of South Asia become so popular? By being first up in the morning. In exacting historical and scientific detail, Lawler reveals how the reliable crow of the cock, along with his mate’s prodigious egg-laying abilities, allowed chickens to become “the world’s most ubiquitous bird.”

Archaeological evidence allows Lawler to follow the path of the domesticated chicken via trading routes that connected early civilizations. This was a bird that got around because it was so darned useful. A sensitive circadian system that allows it to recognize light before humans meant “roosters were reliable heralds of the dawn in the era before alarm clocks” and prized by farmers of ancient Egypt above feathery competitors such as geese. The same trait offered spiritual guidance to the Zoroastrians of Persia, providing “the death blow to the world of idleness.” And the Romans rarely made a move without first consulting chicken entrails. So esteemed was the rooster among ancient people that Lawler speculates its serrated comb is the source for the familiar crenellated shape of a king’s crown.

More recently the chicken has achieved ubiquity in other ways. A genetic predisposition to modification, combined with the tools of mass production, has allowed it to become the world’s most necessary source of protein. Over the past two decades, meat and egg production have both doubled worldwide, making it possible to feed a rapidly urbanizing planet. An astounding one trillion eggs are laid annually. Alongside its enormous presence in ancient history and modern food science, Lawler also contemplates the chicken’s surprising popularity in English idiom. As the rooster does not have a penis, how curious it is “that our favoured slang word for the male organ refers to a bird that lacks one.”