Why Herbert Hoover was a giant of the 20th-century: A Q&A with biographer Ken Whyte 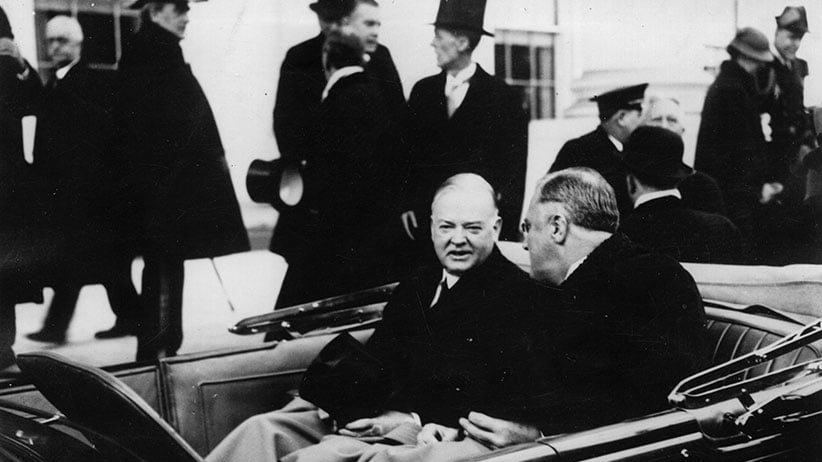 16th March 1933: Franklin Delano Roosevelt (1882 – 1945), the 32nd President of the United States of America (right) leaving the White House, Washington DC, for the Capitol on his inaugural day, with 31st President Herbert Clark Hoover (1874 – 1964) beside him in the limousine. (Topical Press Agency/Getty Images)

Ken Whyte, whose lengthy career in Canadian journalism includes stints as editor-in-chief and publisher of Maclean’s, is not the only writer to have become fascinated by Herbert Hoover, 31st president of the United States. But Whyte’s new book, Hoover: An Extraordinary Life in Extraordinary Times, is the first biography to look at the entire long arc of Hoover’s life and to establish his status one of the most consequential Americans of the 20th century. Few other presidents—perhaps only John Quincy Adams and Jimmy Carter—had post-incumbency careers that were more significant than their time in office, and for none but Hoover that was true both before and after his presidency.

Q: You open this 600-page book with a passing mention that you are not a fan of presidential biography. So what brought this on?

A: Presidential biographies often read like fan fiction. They’re all about finding the epic qualities in the life of “the man who became president,” which makes them fail as biography because you don’t see the character in a human scale. So I’m not a fan. I didn’t want to write a biography of Hoover, I wanted to write a story about him and his adventures in Belgium in the First World War, when he almost singlehandedly fed 10 million people for the duration of the conflict—Schindler’s List on a colossal scale. But everyone I took it to said, “No, no, you have to do the whole life.” So I looked at his life and saw that Hoover was relevant to pretty much everything that happened in the 20th century, from the Great War to the Cold War.

Q: He and Winston Churchill were almost exact contemporaries. Hoover was born three months before Churchill and died three months before him, too. Their lives run in parallel: around the turn of the century, when Churchill is exhilarated about being shot at with no result in the Boer War, Hoover is feared dead in the Boxer Rebellion before emerging from China with dubious but highly lucrative mining concessions. They both live long enough to advise President John Kennedy.

A: Yes, and they never liked each other. Hoover always felt that Churchill was a little more eager to fight than a leader should be. And a lot more ruthless about it, too. Hoover had a strong humanitarian streak. He was very sensitive to the carnage of the Great War and wanted very much to avoid the second war. The thing about Hoover is you could write a whole book on his humanitarian adventures after the Second World War, too. You could probably write a whole book just on his interventions in Poland after the First World War. He was just so involved and so ubiquitous.

Q: And his mother was a Canadian.

A: From just outside Toronto. But Hoover didn’t emphasize that his maternal line were all loyal to the Queen. He’d spent so much of his own life in England, he was already seen as a suspect or quasi-foreigner himself; if it became noticed that his mother was a British subject he would have had an even more difficult time convincing Americans that he was qualified to be president.

RELATED: 6 Presidents of the United States with ties to Canada

Q: Still, for most people now, if Hoover is known at all, it’s as a bogeyman: the guy who screwed up the Depression, made it worse. Is changing that perception one of your aims?

A: Yes. He’s always going to be identified with the Great Depression, and he was a political failure then. But he was not to my mind a failure from his policies. He did a lot of really good things to combat the Depression and succeeded a lot more than people give him credit for. After three years, though, by the time he came up for re-election in 1932, Hoover hadn’t found much to form a bond with the American people. And he was up against Franklin Roosevelt, who was an immensely attractive candidate. Hoover’s political, not policy, shortcomings really cost him.

Q: Since it’s very hard to avoid Trump references of any kind these days—especially when talking about an autocratic businessman turned president—I was struck by something in your account of the 1932 presidential campaign. Policy differences aside, Hoover was playing the awkward, baggage-laden, policy-wonk Clinton figure, while FDR got to play the Trumpian guy with a direct connection to the voter’s psyche.

A: Both Hillary and Hoover did have problems bringing themselves across to an audience, and that hurt them, but I don’t think Hoover ever had quite the same baggage. Most people considered him to be honourable and honest. But your point about Trump and Roosevelt I think is fascinating. We tend to think of Roosevelt, retrospectively, as this great and honourable leader and forget how he campaigned in 1932—talking out of both sides of his mouth, running to the right of Hoover, to the left of Hoover, not ever bothering to make sense of his own comments or his platform, making outrageous allegations like all the money in America was controlled by five individuals, railing against the crooks in Wall Street and Washington and associating them with Hoover.

Q: Hoover’s first entry into public service was to rescue Americans stranded in Europe, some 100,000 of them, by the outbreak of the Great War. And he was on the scene to do that because he had for years been living a prosperous life in London, when he wasn’t on one of his five globe-spanning journeys during that time. He was emblematic of the first globalization.

A: Absolutely. In a way Hoover was one of the first one percenters: educated at good schools, working for a global company, living a transatlantic lifestyle, very much a cosmopolitan figure. He was ahead of his time that way.

Q: Then came his campaign to keep German-occupied Belgium from starving.

A: When he began the Belgian relief effort—importing food from around the world, from wherever he could find it, getting it past the British blockade and through German lines—Hoover was often buying supplies on his own account because he didn’t have any government money at first. After America entered the war, he was put in charge of U.S. food production. When the war ended he had tons of perishable food on hand that he managed, over the objections of Britain and France, to get into now-starving Germany.

Q: Hoover did it all on the fly; in one case his men swapped two locomotives for two million eggs.

A: Everything Hoover did over there was improvised. You could dump him into any kind of calamity, no matter how big, and he could find his way around, work things out and bring order to the situation in an incredibly short period of time. When the war was finished, the political leaders gathered at Versailles basically handed the economy of Europe to Hoover and said, “You fix it.” That’s why The New York Times called him the nearest thing to a dictator that Europe had seen since Napoleon.

Q: Next on his now-fix-this list was the Mississippi flood of 1927.

A: It was enormous natural disaster, impacting 17 states, but President Calvin Coolidge didn’t believe it was the federal government’s role to protect people from the weather. So Coolidge tried to sit still and hope the sun would come out and the Mississippi Valley would dry up and it wouldn’t cost the federal government anything. But when the levees along the Mississippi started breaking, he had no choice but to move and he sent in Hoover to fix it. Which he did. Managed to rescue hundreds of thousands of people and get them all to camps, get them all fed, keep them clear of disease. The whole thing became a model for disaster-relief efforts.

Q: The Will Rogers joke—when a man is sick he calls the doctor, when the United States is sick they call for Herbert Hoover—must have reflected a widespread sentiment.

A: He was generally viewed as the most competent man in America. One of the great ironies is if Hoover had not been elected in 1928, whoever was president when the Depression came would probably have turned to Hoover to get the country out of it. Nobody was higher in public esteem or held in more confidence that he could fix problems like that. And to a large extent that confidence was warranted. What really surprised me in Hoover’s fight against the Depression was how improvised it, too, was. I read all the literature claiming he sat back and waited for it to go away, when in fact there were about five different approaches he took over three years. He was always experimenting, always—and eventually, towards the end of 1932, I think he finally hit on the right formula. But by that time the Democrats were more or less in control of matters and he lost the election of 1932.

Q: It was in large part because he was all over the map in looking for a solution to the Depression that Hoover can lay claim to being the father of both the New Deal and the conservative reaction to it. Is that the main theme of your book?

A: Yes. Hoover was a progressive Republican all through the 1920s and seen as a departure from the laissez-faire types like Coolidge. He came to the presidency in 1928 with a more interventionist agenda than anything Coolidge would have taken on. Hoover believed that the government could do positive things for the American people. When the Depression hit he was not at all hesitant about using the federal government to try and counter the effects of the downturn. He bailed out the financial sector. He bailed out agriculture. He did all kinds of counter-cyclical spending, like public works programs. After he lost the election of ’32, a few of the more honest New Dealers acknowledged that a lot of their plans had been anticipated by Hoover. Now Roosevelt went further than Hoover ever would have. But there’s no way you get from Calvin Coolidge and the austerities of the American government in the ’20s to the New Deal without a figure like Hoover, without a bridge in between.

Q: But Roosevelt did go farther than Hoover ever would have, which had its effects.

A:  Roosevelt was dictating wages and prices, creating new agencies by the dozen and hiring civil servants by the thousands. And controlling more aspects of American life and the American economy than anyone before him had imagined could be done. Hoover—in part because of personal animosity toward Roosevelt, but also because he genuinely believed Roosevelt had crossed some lines—became the voice of the counter-revolution. And essentially established the modern American conservative movement. So you have one man, Hoover, who’s responsible for the two main intellectual currents in American politics over the last 100 years: New Deal liberalism and American conservatism, which grew up in opposition to it. The fact that one person could straddle both is telling. It suggests that the polarization of American politics has always been to some extent overstated. Left and right have similar objectives, and there is more common ground than either side will admit.