With her first graphic novel, Margaret Atwood is just one author considering the role of free-roaming cats in bird deaths

Peter Marra wants to make something perfectly clear: he likes cats. The head of the Smithsonian Migratory Bird Center in Washington loves wildlife and animals in general, including felines. And he agrees with those, including his 15-year-old vegetarian daughter, who insist the disasters befalling the natural world during what’s becoming known as the Sixth Great Extinction ultimately come down to us. It’s humans who are causing the habitat loss and climate change that are the major drivers of species extinction. It’s humans too who are maintaining the army of cats wreaking havoc around the world.

Estimates of the number of “unowned” cats (feral or stray) in America and Canada range from 70 to 110 million; add in the number of domestic pets allowed outdoors and there are more than 160 million cats loose north of the Rio Grande. Together they kill about 2.6 billion birds annually in the U.S. alone, and another 200 million in Canada. For Marra, co-author (with freelance writer Chris Santella) of the forthcoming Cat Wars: The Devastating Consequences of a Cuddly Killer, those numbers are doubly disturbing. Worse even than the scale of the slaughter is the way we allow to fester a problem that, relative to climate change or habitat destruction, is eminently solvable.

“We can absolutely fix this,” says Marra in an interview. “We’ve done it with dogs,” he adds in a reference to how decades of licensing, law enforcement and—most important— social consensus have virtually removed free-ranging dogs, once a serious health hazard and menace to other creatures, from urban areas. “We’ve known about cats’ toll on bird life for a century, we know what we need to do, including—let’s face it—some euthanasia. We can do this, rather than be constrained by a very vocal minority.”

While cats do have their champions, many of them tigerish in their defence, there is a vast middle ground made up of those whom Marra hopes to reach—people who love cats and birds alike, but who unknowingly enable the slaughter. That includes the tens of thousands of suburbanites who let their pets outside and also install backyard bird feeders, effectively offering kitty a target-rich environment. And, too, the likes of his daughter, who wrestles with the morality of preventing bird deaths by causing cat deaths—an issue of concern to Margaret Atwood as well. 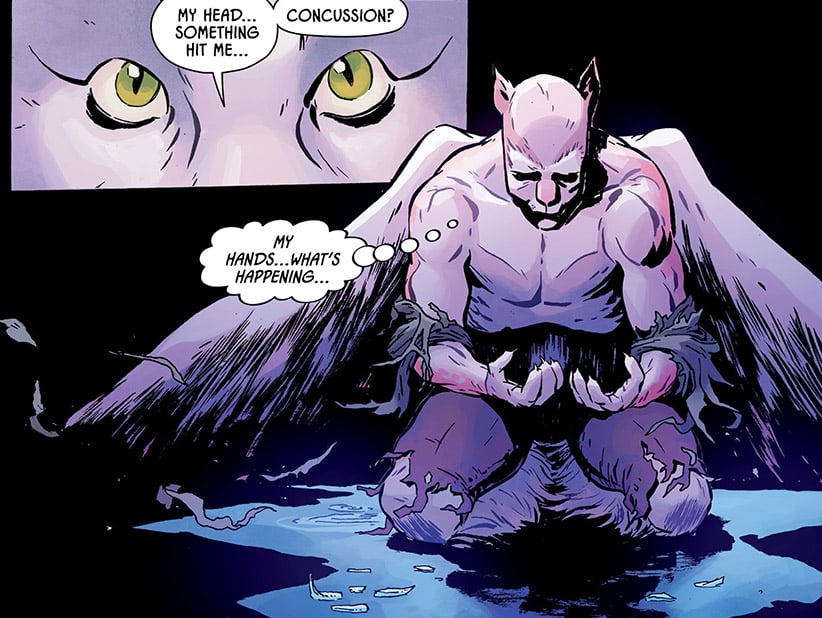 The literary icon’s first foray, at 76, into graphic novels is Angel Catbird, about Strig Feleedus, a young scientist who has a traumatic encounter with a cat, an owl and a speeding car, while carrying a flask of gene-altering chemicals. The result is exactly what the title foretells: Strig arises from the wreckage part-man, part-cat and part-raptor bird. He falls in with a sympathetic crew of “natural” half-cats—meaning they didn’t need a genetic soup bath to have their inner felines emerge—who are targeted by a rat-man. Dr. Muroid is a sound choice for archvillain: there are rat “fanciers” in North America to be sure, but, as an organized lobby, they can’t hold a candle to bird or cat lovers, and only the most stringent environmentalists worry about cats’ effects on small mammals.

Species sensitivity isn’t the only shrewd touch in a beautifully drawn (by Vancouver-based Puerto Rican artist Johnnie Christmas), very funny and—from a perspective like Marra’s—fence-sitting comic. Atwood, a noted birder, also owned cats for 50 years, “always letting them outside, and often receiving the ‘presents’ ”—meaning the body parts of birds or mice—“that would turn up in the house, sometimes on my pillow.” (Many cat owners have been so blessed; the current scientific thinking, says Marra, is that the cat is either caching food or a toy, or trying to “teach” a human to hunt.) “The only reason I don’t have one now,” Atwood adds, is age, “the bending over, the getting back up. Otherwise, I’d have one in a shot. They help you write.”

FROM THE ARCHIVES: Margaret Atwood on The Heart Goes Last—and human-chicken sex?

That makes Strig, though his creator disavows he’s speaking for her, the living embodiment of identity conflict. It’s the source of the comic’s ﬁnest humour. Highly attracted to half-cat Cate Leone, but uncertain how any possible progeny of his might turn out (literally), Strig ponders how much he’d love it if Cate “had my kittens. Or laid my egg. Whatever.” (In later volumes of the projected trilogy, Strig will encounter bird-people and, inevitably, a half-bird love interest, AtheneOwl, who may—Atwood refuses to confirm her own punning suggestion—be a Hooters employee.)

The identity conflict, though, is more seriously summed up in Strig’s puzzled questioning of his own impulses when he comes upon a baby bird tumbled from its nest: “Do I rescue it or eat it?” That’s “always the question,” laughs Atwood, “for political leaders too.” Angel Catbird doesn’t really answer it. “Joined at the hip” as it is with Nature Canada’s Safe Cat, Safe Bird program, which emphasizes the advantages to both sides of keeping cats indoors, safe from harm to themselves and to prey, and which has provided the “cat fact” sidebars sprinkled through the comic, Angel Catbird has little to say about feline numbers. Particularly how low they should go, and by what means. Atwood may confess to having “bird blood on my hands,” but she’s not about to advocate for spilling cat blood. 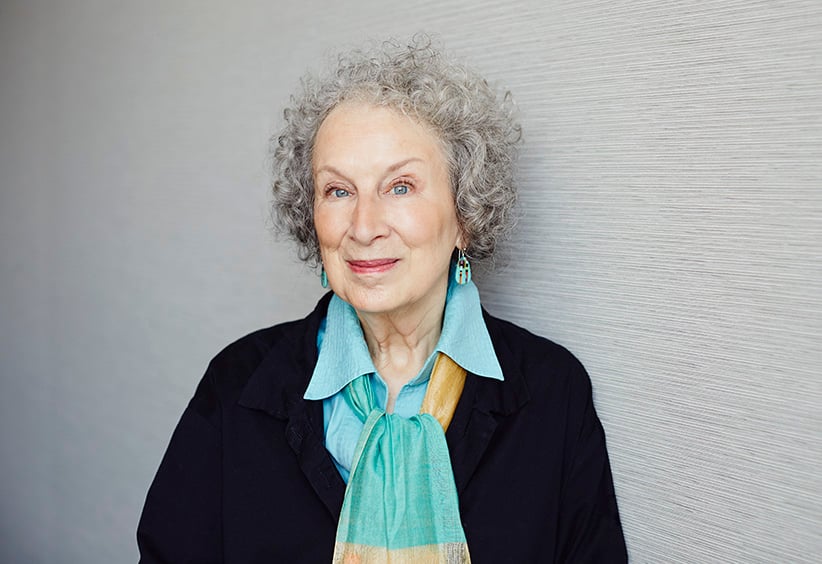 Marra appreciates efforts like Nature Canada’s, but he marshals an impressive array of scientific research to demonstrate how they don’t go far enough, fast enough. Introduced to islands where the local fauna never faced such a threat, cats became the primary cause of 33 extinctions of birds, mammals and reptiles, and a key factor in another 142 steep declines or geographical range reductions. They came to North America as an invasive species 500 years ago, and still haven’t settled down as a part of the ecosystem. In part that’s because they are what Marra calls “subsidized” killers. Almost half of them are not subject to the cost of over-hunting—crashing population numbers as they run out of food—because they can just go home for a can of tuna. Many of the feral population are fed by rescuers; even when they aren’t, their numbers are replenished by their extraordinary reproduction rate and a rising tide of cat abandonments.

The poster kitty for almost every aspect of this is one Tibbles, a pregnant cat who came with a lighthouse keeper in 1894 to Stephens Island off New Zealand, the sole home of one of only three flightless songbird species in the world. Within about two years, Tibbles and her descendents accomplished the fastest bird extinction ever recorded.

It was another century before researchers began to look at the cat toll on continents, and the first findings—continually replicated since—provoked a fierce backlash, including death threats from cat lovers. “There are sharp divides in the response to free-range cats,” Marra dryly remarks, ranging from “feed them” to “shoot them.” Pointing to online profiles of local feral cat caretakers posted by Toronto-based Animal Equity, Marra stresses their compassion and their generosity in supporting feral colonies. “I don’t want to be the person who turns away,” Rachel S. is quoted. “This what I can do with my skills, my time and my energy, and I see a difference in the lives of these cats.” 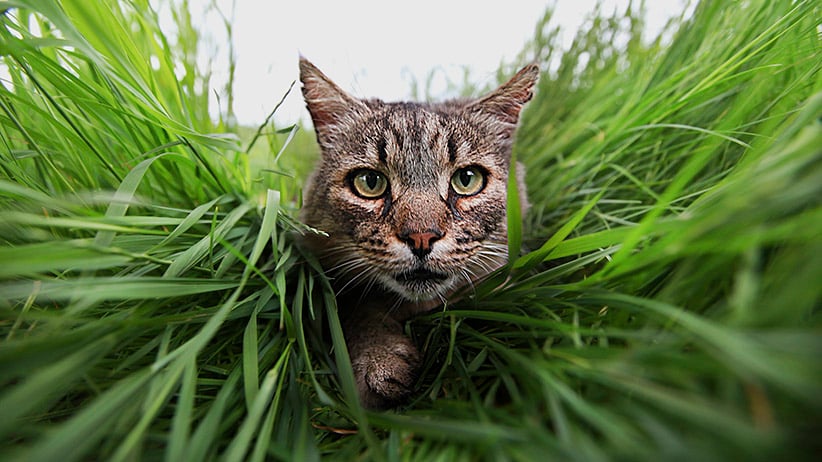 Cat in the grass. (Istock)

What Marra sees is a chasm in world view: “To advocates, the rights of the individual animal—each kitten, momma or tom—are paramount,” and the danger to undifferentiated birds, their individualism not recognized, is ignored. That’s a realization that prompts one of the most emotional lines in Cat Wars: If more people “had the chance to hold a songbird, look closely into its tiny eyes and feel its fluttering heart,” they might think differently. But because of the intensity of their focus on individual cats, Marra adds, advocates can rival anti-vaxxers or climate-change skeptics in “aggressively contesting” scientists’ findings.

Cats, in fact, suffer cruelly from the sort of half-individualization they have secured in the popular imagination. As a friend told Marra, “If you and I are going out to a restaurant and there’s a dog hovering about the dumpster, well, there goes the evening. We’ll spend it corralling the dog, identifying it, getting animal services involved—whatever we needed to do to restore that dog to its home. A cat? We’d barely notice.” Instead, we have “become the no-kill generation,” says Marra, at least for some, the turning away of fresh admission by overcrowded shelters is the major reason that people simply abandon their cats.

What North America needs, Marra argues, is the kind of attitude change that brought pet dogs to that status and turned littering into a social sin. It will take more than a generation, he thinks, and in the meantime, as long as large numbers of people keep abandoning cats in a way they’d never dream of with dogs, some of those cats will have to euthanized. It would start with feral colonies near reservoirs—cats are vectors for water-borne diseases, including toxoplasmosis, an under-reported disease linked to mental illnesses from depression to schizophrenia—and near the habitats of endangered bird species. “Those cats would be trapped if possible and poisoned if not. After being neutered, the trapped cats would be adopted or put to sleep. It’s that simple.”