Why oil sands protesters and companies both get it wrong

With his book The Patch, environmental writer Chris Turner makes a plea for realism in the noisy, misguided proxy war over pipelines 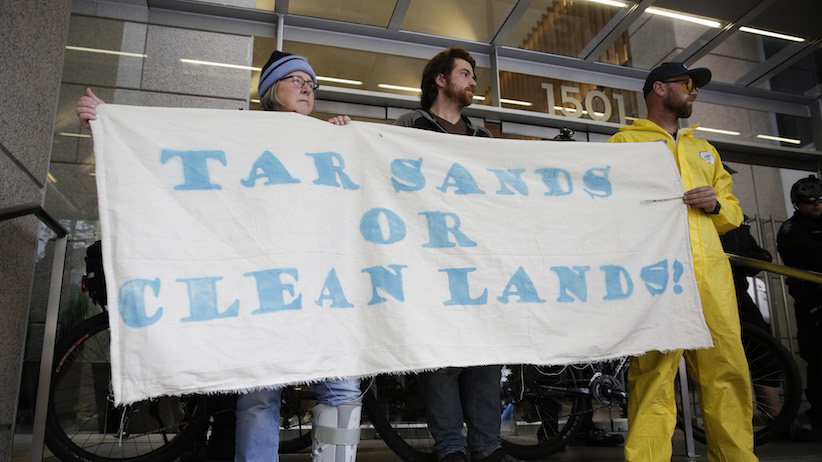 Activists demonstrate on May 17, 2017, in front of the building where the Canadian Consulate is located in Seattle, Washington.
The demonstrators demanded that Canadian Prime Minister Justin Trudeau withdraw support for the Canadian Tar Sands projects. (JASON REDMOND/AFP/Getty Images)

Placards and protesters are at the ready in Burnaby, B.C., where construction will begin shortly to twin the Trans Mountain bitumen pipeline. In Quebec, hearings on Energy East are on hold, as that pipeline’s would-be builder chafes at the National Energy Board’s new plan to weigh the impact of its upstream climate-change impact. And around Fort McMurray, Alta., thousands of workers continue to use mining trucks and steam-assisted gravity draining (SAGD) to extract nearly three million barrels of oil daily, confident that folks somewhere will demand the stuff, no matter how it gets to refineries and customers.

There was a time, before the latest price crash, that the oil sands seemed like an unstoppable, little-questioned force of growth and expansion—Canada’s ticket to superpower status. Then, in 2008, a large flock of migratory ducks landed and died in a settling pond for Syncrude’s oil sands waste product—setting in motion, though it was hard to predict at the time, industry-activist tensions that would put northern Alberta’s pay dirt at the forefront of a blistering debate. So writes veteran author Chris Turner in his new book, The Patch: The People, Pipelines, and Politics of the Oil Sands. Though his background is in environmental writing, Turner finds blame on both sides of this ever-noisy and nuance-starved debate. This conversation has been edited for length.

Q: You write that of the 90 million-odd barrels of oil in all the world’s daily supply, none to date has had its necessity as thoroughly audited as the patch’s 2.4 million barrels. Why did this happen?

A: It happened for two reasons. The biggest carbon footprint of any oil is a barrel of oil sands bitumen. There was a legitimate case, and therefore it was already on the radar of Canadian environmental groups and critics. The less-justified reason is that it became a very convenient political target for the larger international climate activism movement at a time of despair coming out of the [2009] Copenhagen climate talks, that Kyoto was dead and there might not be a successor. A handful of environmental groups, predominantly in the U.S., knew they needed some catalyst, some new call to action. And it so happened there was this Keystone XL Pipeline proposal, it had a bunch of things that made it politically convenient for the U.S., in that it went directly to the president, you didn’t have go to Congress. It already had political enemies locally and worries about the aquifer and so on. The symbol became something out of all scale to its actual impact on the atmosphere. Once it became the target, it seemed that no matter what the regional environmental issue was, the ultimate thing was we had to stop the carbon bomb. There was a legitimate premise for that scrutiny, but the criticism eventually outweighed the crime.

READ: How to make Canada an energy superpower

Q: If the pipelines are an oil sands proxy war, as you write, is the protest and pushback overblown?

A: You have to separate the climate argument from the other arguments. The Kinder Morgan pipe, for example. There is a pretty legitimate grievance that First Nations along the pipeline route have. It’s ultimately a legal grievance, and as the government has said, it should ultimately go to court, not be settled in the streets. The climate argument that any given pipeline represents a make or break point for the entire world’s or even Canada’s ability to meet greenhouse gas emissions targets, that’s pretty overblown. These pipelines have become really good political organizing tools and catalysts for action. That’s why you continue to see them as these flashpoints. It’s hard to protest against a thing, whether it’s tailpipe emissions, oil extraction in Northern Alberta or the Gulf of Mexico or wherever else. You can actually go to a pipeline site, you can stand there. You can get media attention to it. And it crosses over all these lines: local environmental impact, there’s the climate argument, there’s the First Nations rights argument, there’s the stewardship argument, so it can really draw from a whole wide sector of civil society in the way that the faceless catastrophe of climate change can’t.

Q: In scanning the history of the oil sands, should anyone have foreseen the conflict to come?

A: You really can’t fault the industry until the boom is on in the 2000s. The carbon footprint of a given barrel of oil over any other was not really on the political map when Chrétien was changing the tax code to finance a mine and Klein was rewriting the royalty regime to make it easier to expand the industry. At that point that really wasn’t on the radar anywhere. But you could see the criticism beginning to mount and grow more vehement, in 2006, 2007, 2008, where you even had groups with industry members on them saying, “Look, the scale of growth is out of control.” And there were these early warning signs, and that’s why I start the book with the Syncrude duck incident, because that was in a sense the sneak preview of this thing—that to the industry was a shrug, but it became a thing that haunted them for years afterward. Had they been paying enough attention then, they might have recognized the way this is playing out in the broader public is changing, and we should pay attention. The industry and a lot of its defenders actually retrenched around the idea of screw you, everybody needs oil. I think there was a tactical error there, and that had the industry been ready for it once that first wave of anti-Keystone protest came on, it could have been defused before it became a global campaign that couldn’t be stopped anymore. And that’s where we are now, where no given pipeline company or ministerial department could possibly adequately respond to the amount of opposition there now is.

Q: The economics since 2014 have changed dramatically. You see economist Peter Tertzakian say that it’s not just the end of the megaprojects, but that oil sands are yesterday’s news. What impact does that have?

A: The pipe dreams of eight million barrels of oil a day from the oil sands are almost certainly never going to be achieved. Now it’s more focused on the stuff we’re already producing and the other really good deposits we have in our portfolios. Is there a way we can do that at a cost that keeps us competitive? That, to some degree, is a more immediate question to a lot of them than the carbon budget problem. As I talk to Harbir Chhina [an executive vice-president at Cenovus], he’s way more worried about huge shale plays in Texas than he is about not getting a pipeline built.

Q: And as that happens, does the activists’ gaze shift away from the oil sands as well?

A: Maybe not. I think the pipeline proxy debate unfortunately has real legs, if you’re sitting 30,000 feet above and you’re asking what’s the most effective way for Canada to reduce its carbon footprint. Spending the next five, 10 years fighting over pipelines does not seem the best way to do that. But it’s very hard to get people out of those trenches now that they’re in them.

Q: You conclude that “there is no common ground. And that is how both sides lose.” It seems the federal Liberals are trying to find something in the middle, with their mantra that the economy and environment go hand in hand. What progress are they making?

A: They’re doing a not-bad job of it if that’s your goal, to find that big mushy middle where the Liberal party likes to live, where most Canadians or at least a lot of Canadians see themselves: we see the benefits of this industry and want it do continue to prop up our economic success, while we also see that we need to move away from fossil fuels. The thing that remains to be seen is whether they can get enough people onto that middle ground now, or whether the politics just seem too divisive. I don’t have a clear answer for that; maybe they do.

Q: Has one side or another—industry or environmentalists–been better at coming toward that common ground?

A: You could argue that the industry and its partners in government have tried to get better at it. With Notley in Alberta and Trudeau federally, they’ve been willing to work with governments that are not their usual allies, to try to find a way to get what they want done in terms that are acceptable to the opponents. But it feels like some part of that opposition is not going to be moved by anything. They don’t seem to buy the industry’s case, or even the NDP Alberta government’s case for it. The NDP can’t sell it to their own cousins in B.C.

Q: Readers familiar with your work will know your writing on climate change solutions like solar, wind and sustainable communities, and your past as a Green Party candidate. Was there a time when you identified with the climate catastrophe, shut-it-down crowd?

A: There’s no radical, short-term, under-a-decade way to make that shift without total economic catastrophe. You basically have the only post-cod-collapse job creation strategy that has happened in a lot of Atlantic Canada, keeping places like Newfoundland and Cape Breton and some others from having some particularly nasty, chronic problems. You can’t just decide here’s what you should do about CO2 emissions in northern Alberta. You also have to take into account jobs in small-town Nova Scotia at the same time. That gets at the complexity of this. My big thing is this is not a simple issue. If your take on it fits on a protest placard, you’re probably not giving it as much thought as it needs.

Q: You’ve written books in the past in awe of green tech. You seem to have the same reverence for extraction methods, tailings-pond remediation. Is there a solution for zero-emissions oil, as some in the patch predict? Will people one day talk about clean bitumen?

A: I think the zero-added-emissions barrel is not too far out of reasonable technological development from where we are today. The fact is that [emissions from] your average SAGD or mined barrel are significantly larger than the average Saudi crude or Gulf of Mexico barrel. Closing that gap to a point where it’s negligible is certainly within the realm of possibility. Speculating on the future of energy is a good way to look foolish in a couple years. But can they get to the point where they are carbon-budget competitive with the rest of the industry? With the right concerted amount of effort and policies that oblige and encourage that technological development, they can. And that seems worthwhile, given that regardless of how intense the protest, there is an operation up and running to produce this stuff at nearly three million barrels a day, and that’s going to be there for decades. So if we can get that down to the point where at the very least it’s not extra dirty, great.