Why poetry disappoints us all

Ben Lerner explores The Hatred of Poetry with the best, and worst, the genre has to offer 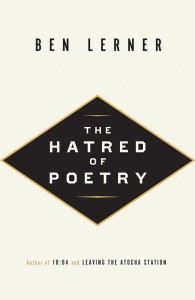 THE HATRED OF POETRY

Plato famously banned poets from his ideal republic back in 380 BCE, on the grounds their airy dreams would corrupt the virtues the philosopher wanted to instill in youth. Things really haven’t got much better for poets, Lerner argues, despite their hollow formal exaltation—there are no novelist laureates, after all—because, not so very deep inside, even poets hate poetry. The reason lies in the gap between dream and reality, the music of the spheres and the faint echo that results. You can blame that on Plato too, Lerner writes in this slim, lively and often very funny polemic addressed to poetry’s haters, among whom Lerner, an accomplished poet and novelist (most recently of the well-received 10:04), numbers himself. When one of Western thought’s prime movers expressed hostility, rather than mere indifference, to poetry, Plato implanted in our cultural DNA an impossible notion of poetry’s intense social power.

Lerner provides illuminating close readings of the best and worst that English-language poetry offers, including a compelling case for why Emily Dickinson is best read in facsimile: Her manuscript pages, full of crosses indicating variant words and dashes Lerner considers “vectors of implication where no words will do,” force readers to “shift back and forth between modes of perception—we read one minute and look the next.”

Then there’s the notorious William Topaz McGonagall, the 19th-century Scottish versifier, whose “The Tay Bridge Disaster” and other eye-popping works have made him a popular contender for the world’s worst poet. Lerner shows precisely how McGonagall’s lines about a horrific rail accident—“Beautiful railway bridge of the silv’ry Tay / Alas! I am very sorry to say / That 90 lives have been taken away / On the last Sabbath day of 1879 / Which will be remember’d for a very long time”—go so very wrong. The mishmash of meter in the first line makes the entire point of eliding the “e” in “silvery” moot; “I am very sorry to say” is perhaps the sorriest expression of sorrow poetically imaginable; McGonagall’s apparent belief that “eighteen-seventy-nine” is as brief to say as it is to write in digits turns that line into “a prosodic train wreck.”

Yet the Scot is almost as useful to Lerner’s argument as the American, for Dickinson and McGonagall share one trait: there is “nothing mediocre” about either. The latter’s “horribleness” as much as the former’s striving to put on a page more than what she judges words can convey demonstrates the gap between desire and result. And demonstrates too the individual voices of poets. As long lines of poet laureates prove, poetry is an art we want to speak for us all; but no poet really can, says Lerner, and that’s why we hate poetry.