New York Times critic A.O. Scott makes the case for the most maligned of literary figures 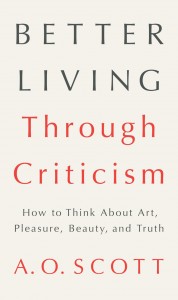 That old cynical complaint “Everyone’s a critic” has never been truer than it is today. Consider the plethora of commentaries that have turned Amazon.com into the world’s largest compendium of book reviews, or American Idol, in which millions of viewers determine who will take home the coveted crown. Yet, according to the New York Times’ Scott, professional critics remain the most maligned of literary figures, feared and despised for their audacious efforts to “separate the wheat from the chaff.”

The Biblical reference seems fitting, for film aficionados see Scott as a kind of God whose edicts powerfully influence audiences and awards. His book is an often-playful defence of criticism’s indispensible role in human experience. He takes on the despotism of individual opinion, the interminable culture wars and the perilous (for critics) rise of the digital age. Woven succinctly throughout is an elegant survey of criticism from Aristotle to the present day. Germane to Scott’s ethos are the seminal essays of Matthew Arnold, which encourage the pursuit of culture as a major civilizing force.

One impetus for the book was a dust-up with actor Samuel Jackson, who lambasted Scott for treating The Avengers as a movie of ideas. No problem, says Scott. Debate is healthy for critical culture. He insists every work of art is an act of criticism in itself: Each ﬁlm comments on the movies that came before it and every artistic work represents a critique of the world.

The problem is that audiences are severely overwhelmed. To illustrate, Scott introduces a scene from Henry James’s The American. In it Christopher Newman sits dazed by the Louvre’s abundance of images. But then he offers a contrasting scene from Open City, by Teju Cole, in which the hero encounters a painting called One Shoe Off. He is mesmerized and becomes, as Scott sublimely says “an instrument of pure perception.”

Scott describes his own embrace of art and criticism as a hunger for “altered states,” including the experience of “the other”—though the notion gives off a vaguely colonial vibe. He’s a brilliant curator. His gorgeous images are drawn across distance, genres and times. Passages of Socratic inquiry cleverly advance his ideas. He reminds readers of their most precious qualities: The ability to think and feel.