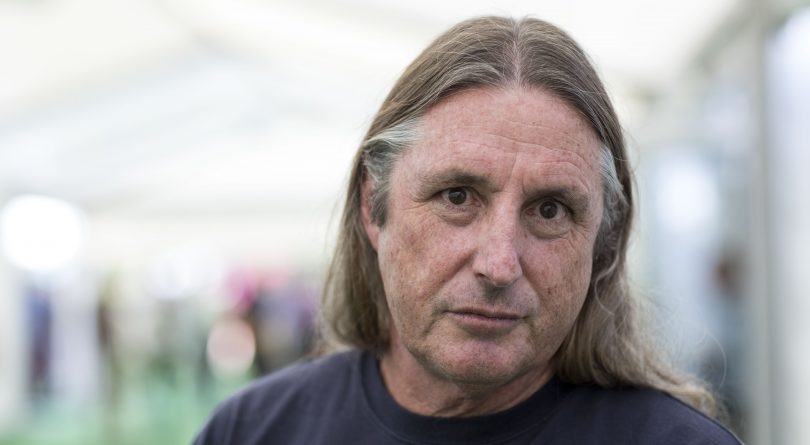 HAY ON WYE, UNITED KINGDOM - MAY 28: Tim Winton, writer, at the Hay Festival on May 28, 2017 in Hay on Wye, United Kingdom. (Photo by David Levenson/Getty Images)

Nominated twice for the Booker Prize—and with two works of fiction, The Turning and Breath, adapted into films—Tim Winton has been one of Australia’s most internationally prominent novelists since 1991’s Cloudstreet. The grandson of a stevedore and the first member of his family to finish high school and go to university, Winton is perennially passionate about class (and fairness) in his fiction, essays and environmental activism. Young Jaxie Claxton, the messed-up narrator of his latest novel, The Shepherd’s Hut, is another memorable working-class character. The book resonates with “the poetry of the colloquial, fully realized characters, and the fearlessness to enter the deepest mysteries of being,” U.S. writer Ron Rash has written. From the small Western Australian town where he lives and writes, Winton spoke to Maclean’s about sharks, firearms, faith, film adaptations and, of course, class.

Q: “Change is hard and hope is violent” is the epigram that begins The Shepherd’s Hut. Really?

A: I think so, yes. Real hope requires passion. And moments of disorder and derangement. Things can only be remade if the existing order of things is broken. I think it’s a mistake to think of violence in purely physical terms. Many of us experience this in love, for instance. The force of hope causes us carnage and havoc. I’m interested in the feral power of hope. We’ve become so wedded to the safety of what’s reasonable, but thank God hopes and dreams overrun it now and then and we get to move on.

Q: Is peace on its way for Jamie Claxton?

A: Well, you’d have to be some kind of optimist to think so, wouldn’t you? The kid yearns for peace and yet he’s brimming with the violence of his upbringing, and at the end of the book he’s free and mobile (not to mention armed and ornery), but the odds of a 15 year-old borderline sociopath finding peace on the highway seem pretty steep. As for the rest of us, well, let’s hope so. The world’s most powerful nation is in the hands of a bloke with less emotional intelligence than my foul-mouthed waif-narrator, so you wouldn’t assume things will necessarily get better anytime soon. But peace is necessary. I guess it’s our job as citizens to demand it and value it and help create it.

Q: Your Monthly essay on class is excellent. The subject suffuses your new novel and much of your other work.

A: One of the many great lies of trickle-down economics is that problems of class are resolved. I think most “advanced” economies are now facing widening gaps between rich and poor, powerful and powerless. There used to be an open acknowledgement of class in my country. We saw it as a fact and a problem to be honestly addressed and for a long time we did a good job addressing it. Lots of folks forget Australians achieved an eight-hour working day in 1856. Just one example. Working people were proud, organized and successful. Their cultural heft was a fact of life. And in the last 30 years, since the advent of sado-monetarism, we’ve seen the emergence of the working poor and a robber baron cohort we were spared in the 19th century. We’ve allowed ourselves to recolonized, not by another nation, but by a badly mistaken notion.

Jaxie’s only dimly aware of class matters, but he speaks a vernacular whose origins are distinctively proletarian and provincial. For a while I wondered if he was wrong for literary fiction, which is after all largely the province of polite company. In the end I couldn’t resist the spiky profanity of his voice. He’s a violent, racist redneck in love with his underage cousin. Not promising, I know. But he’s always talking about love, decency and peace. A friendless boy who finds friendship in the bloodiest of circumstances.

Q: There is a spiritual aspect here with his unlikely friend, Irish priest Fintan MacGillis. And there are supernatural elements in your other work, like the ghosts in The Riders. As a teenager, you were a fundamentalist Christian. What do you believe now?

A: Well, I used to believe in three square meals a day, but I’ve learned to cut it back to one and a half. As to religion, I’m all for it if it’s about mercy and kindness. No interest otherwise. I still don’t know what to make of the supernatural. But I think it’s fair to say people’s experience of life is not always accounted for by our empirical descriptions of it.

Q: You’ve fessed up to the autobiographical firearm element in your short story “Immunity.” Can you talk more about that time in your life, and how it informs the notable empathy in your work?

A: Well, it’s true. When I was 13 I used to sneak into my parents’ bedroom, pull out the family rifle, and point it at strangers. I was a new kid in town and the gun gave me a sense of control, I guess, some sensation of power at a time in my life when I was a bit lost and panicked. Lots of people have strong feelings and no safe language in which to express them—something I’ve learnt in my adult life, and something I’ve always been interested in as an aspect of my work as a novelist. I did this weird and dangerous thing for several months. I wonder now if I was somehow testing myself, my will, in resisting the urge to load the thing and pull the trigger. I knew what I was doing; I knew exactly what a rifle did. My old man was a cop. Luckily, I wasn’t seen. Things could have turned out differently for me. So what happened? I guess I made friends. And I found the sea and went surfing. The sea was like a salty poultice that sucked all the poison out of me.

Q: Rose Byrne, impressive as Raelene in The Turning—the 2013 short film collection adapted from your stories—told me she misses Australian humour living in America. You seem to appreciate and have a similarly earthy Aussie humour?

A: Rose was great, wasn’t she? One of the best things I’ve seen her do. She’s right about humour, and I suspect she’s implicitly referring to the slightly exhausting earnestness and self-projection she has to deal with in the U.S. I’d miss that piss-taking irreverence, too. It can be pretty rugged—even cruel—but quite a bit of it is self-directed. Lots of us like to undercut ourselves. There’s a lot of myth-making done about this, about the origins of it—convict passive-aggro, black humour in the trenches fighting other people’s stupid wars, and so on—and not all of it is bullshit. A lot of us laugh to get along, we laugh to make something bleak a little more bearable. I’m sure plenty of us laugh to avoid taking something serious seriously. The rest of the time I hope we laugh because there’s pleasure in it. Have you ever seen Mr. Tangerine Man [Trump] laugh? Is that not a cause for worry?

Q: In Dirt Music, the protagonist plays with sharks like they’re dogs. You once told a colleague you had done that a number of times and that they respond socially to physical contact.

A: I’ve discovered it’s more fun to swim with whales. A humpback calf is not unlike a giant puppy. It’s when he or she wants to rub noses that things get hectic. One thing I have learned about wild animals is that many have personalities. Even tics. They’re often curious and get pleasure from interaction with other species. And they’re smart.

Q: “The past is present in everything we do,” you also told that colleague. “Your writing seems to me to be moral, in a sense, without being preachy at all,” she said. You: “How unfashionable!”

A: Yes, I think it’s fair to say the past is present in everything we do. We carry it with us, unwittingly most of the time, and many of our patterns of thinking and even our actions are often the consequences of things that happened before we arrived. Right now this is as starkly apparent as it’s ever been: all of us are at the mercy of the carbon that’s been released into the atmosphere since the Age of Steam. So, it’s not just a notion for the literary salon; it’s a pressing, global, existential dilemma. But we have agency. How we deploy that agency is a moral issue. What I do in my time and with my time has a material bearing on the future. The only powerful enemies I’ve made have been from my shadow life as an activist.

Q: The film version of Breath, which you narrate, had its North American debut at the Toronto International Film Festival. Do you feel any connection to Canada?

A: I often feel a kind of cousinly warmth in the company of Canadians. I feel less strange and more at ease in Canada than in the U.S. And I like the specificity that’s often there in the literature. When you read Alice Munro, Joseph Boyden, Alistair MacLeod, Guy Vanderhaeghe or Michael Crummey, you know you’re someplace different and specific.

This interview has been condensed and edited for length and clarity.