Why there is No Such Thing as A Free Gift

The Gates Foundation and its ‘philanthrocapitalists’ should worry us 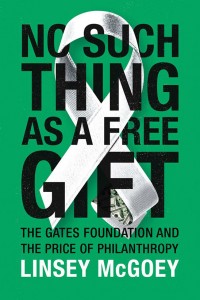 NO SUCH THING AS A FREE GIFT

The Bill and Melinda Gates Foundation is the largest private foundation in the world, with an endowment valued around US$41 billion—with Warren Buffett and Gates pledging much of their fortunes, it will grow bigger—and a total annual grant of around $4 billion. This puts it in the same weight category as the World Health Organization—if the WHO’s budget were controlled by one couple. McGoey’s new book is a timely criticism of a society that allows an individual to accumulate such a distorting amount of financial power; it is an indictment of unaccountable power in general and of the Gates Foundation in particular.

Compared with the originals, Andrew Carnegie and David Rockefeller, who bought goodwill with charity envelopes while calling in the National Guard to shoot striking workers, McGoey finds contemporary “philanthrocapitalists” too comfortable with pursuing self-interest and the public too distracted by one side of the account. We used to be more suspicious of charity and the power it can wield.

McGoey reminds us that total global aid from north to south is tiny compared to tax losses in the south from treaties written and enforced by the north. Similarly, though the Gates Foundation divested from tobacco, the economic weight of the endowment’s investment decisions is 10 times that of their grants. What would save more lives, using their shares (via Buffett) to force Coca-Cola to invent a healthy product, or completing the eradication of polio? Hard to say, but one can guess which would be more expensive.

Tracking the litany of Gates Foundation efforts that have been bad or, at best, ineffective, raises many troubling questions. These include supporting charter schools (which have shown no benefits except by excluding risky and difﬁcult students), support for micro-ﬁnance (sorry, no proven beneﬁts, either, but a source of new revenue for banks) and patent protections for brand-name medicines, which have had appalling consequences for poor countries. McGoey argues the latter are based on Gates’s experience with Microsoft—a company that was started in a university computer lab and built its business by claiming ownership of software that had previously been free.

Likewise, if the Foundation prefers technological solutions, writes McGoey, a Canadian sociologist who heads the Centre for Research in Economic Sociology and Innovation at Essex University, it may be because they reinforce the structures that created its money in the first place. And so, for example, they partner with the American behemoth Monsanto to send proprietary seeds to Africa rather than directly funding African institutions and local capacity. Public bodies do this, too; McGoey uses the example of USAID being forced to buy American food for aid rather than cheaper local supplies. But they have more checks and balances.

There are many painful ironies in a book about a foundation that trumpets measurement and accountability while being itself essentially unaccountable. Probably the sharpest of all is the idea that the failures of philanthropy may be its own success: More problems mean more opportunities.