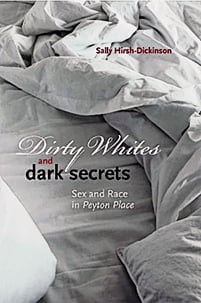 Grace Metalious’s 1956 potboiler Peyton Place was one of the most influential novels of the ’50s, the ancestor of many books, movies and TV shows that seek to reveal the sexy secrets of proper small towns. Hirsh-Dickinson, an assistant professor who wrote her dissertation on Peyton Place, is one of the people pushing for the novel to be taken seriously as literature, and she admits that she has met with some resistance: “On what grounds is Peyton Place the stuff of academic inquiry?” she recalls being asked. She discovers the answer right in the title of the book. The fictional founder of Petyon Place, Samuel Peyton, was a freed slave who found that the North wasn’t much better than the South.

Though this is merely a side issue in the novel, Hirsh-Dickinson claims that the undercurrent of America’s racial history is the key to the whole book, and particularly the scandal it caused at the time. Using “whiteness studies” as a guideline, she argues that the white population of Peyton’s town “cannot deal with the fact that he was black.” Looking at the town’s anxieties from this perspective, she finds racial undertones to a lot of the references in the book; the sexy poor girl Selena Cross isn’t black, but she is “Peyton Place’s duskiest female,” and therefore stands apart from the “normative whiteness” of the town. Other characters who are ostracized in the town are referred to as “dark” in some way.

Like many academic arguments, this one doesn’t always seem to have much connection to what the author intended, but the frequent racial and skin colour references in the book may help explain why Peyton Place had more resonance than other small-town sex novels. As Hirsh-Dickinson says, Metalious’s concept “was a success in each of its manifestations: novel, film and prime-time television drama.” Racial panic might not be the best explanation, but it makes more sense than literary quality.