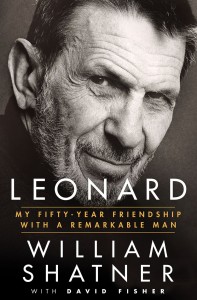 LEONARD: MY FIFTY-YEAR FRIENDSHIP WITH A REMARKABLE MAN

By William Shatner with David Fisher

When J.J. Abrams’s 2009 Star Trek reboot was announced, an interviewer asked William Shatner and Leonard Nimoy about the franchise’s continuation. Stopping Star Trek, Shatner writes, would have been highly illogical: “We laughed really hard, and Leonard replied for us, ‘So you want Paramount to say, “We’ve made enough money. We’re going to stop making money now . . . ” ’ ” Similarly, this book, published after three Shatner memoirs and two of Nimoy’s, is not boldly going where none have gone before. And yet, it’s unexpectedly poignant.

For all of Shatner’s steeliness as the intrepid Captain Kirk and the indomitable Priceline Negotiator—not to mention the fact that he missed Nimoy’s funeral to attend a Red Cross event—he shows a vulnerable side here. Before he and Nimoy became close on the set of Star Trek in the mid-’60s, Shatner tells us, “I didn’t even know what a friend was. I had never had anyone in my life to whom I could completely emotionally unburden myself.” In Nimoy, Shatner met not only the logical yin to Kirk’s yang, but also a fellow workaholic with a resistance. They were born four days apart in 1931—Nimoy in Boston, Shatner in Montreal—to Jewish parents who admonished their desire to act; before Star Trek’s out-of-nowhere success, both had been cobbling together a living from stage and screen to support their young families. Shatner depicts the series’ creator, Gene Roddenberry, as a man with artistic vision and the willingness to take advantage of all who helped him realize it; the co-stars realized they’d be better off negotiating together.

Of course, rundowns of royalties and residuals are as compelling as a poetry recital in Klingon, so Shatner livens things up by setting phrases to pun (“Leonard actually could carry a tune, while I could carry the guitar case”) and describing on-set hijinks. The book’s tone darkens as Shatner addresses Nimoy’s alcoholism—although he was functional, he suffered for decades, as did his son —as well as Shatner’s own third wife’s drug-and-drink dependency, which led to her death. The friends bolstered one another as the only real constants in lives beset by what Shatner describes as “the emotional and professional insecurity” of being an actor. Only in makeup and tight onesies could they solve the universe’s problems.

In later years, the relationship frayed. As Nimoy was dying from chronic obstructive pulmonary disease, he froze Shatner out, no longer talking to him for reasons Shatner insists were opaque: “I kept asking people, ‘What happened?’ But no one could give me an answer. It remains a mystery to me, and it is heartbreaking, heartbreaking.” This book, published a year after Nimoy’s passing, reads as an attempt to overcome the chill, and to show up those who called him “Captain Jerk” when he missed the funeral. Although Shatner sometimes dips into detail only a Trekkie would love, it’s understandable: How else to get the measure of a polymath director, photographer, playwright, singer (more or less), and pointy-eared 23rd-century icon? Shatner’s book is an eyebrow-raising tribute to a fascinating man.