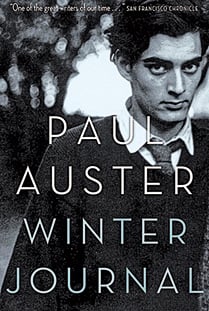 Novelists often say that they write fiction because their own lives are so unexciting no one would care to read about them. Paul Auster does not have that problem. The melodrama began before he was born, when his grandmother shot and killed his grandfather in their kitchen. At 14, Auster recalls, he “stood less than a foot away from a boy who was struck and killed by lightning, the boy you sat next to and watched over for the next hour in a rain-drenched meadow, desperately trying to warm up his body and revive him because you didn’t understand he was dead.” Throw in the author’s own paralyzing panic attacks, his nostalgia for romancing French prostitutes as a young man, and a mid-life crisis prompted by a spectacular car accident . . . this memoir doesn’t waste much time on the dull business of being a writer.

Winter Journal arrives 30 years after Auster’s first memoir, The Invention of Solitude, launched his career as a poet, essayist, filmmaker and novelist (Moon Palace, Sunset Park). Far from conventional autobiography, it’s a cathartic self-portrait of the artist as an old man as he reviews his life at the age 64, and levels an unsteady gaze on the horizon of his mortality. Written entirely in the second person—a pushy conceit that takes getting used to—the narrative rips along as a stream-of-consciousness catalogue, vaulting between past and present, memory and meditation. Amid some gripping set pieces, notably his mother’s death, there are torrential gusts of elegy as inventory. Auster revisits each of the 21 addresses he’s called home. And he recalls the candy bars of his boyhood as if rhyming off ex-lovers (“Milky Ways, Three Musketeers, Chunkys, Charleston Chews, York Mints, Junior Mints, Mars bars, Snickers bars, Baby Ruths, Milk Duds, Chuckles, Goobers, Dots, Jujubes, Sugar Daddys . . .”). You can sense the poet trying to melt down an irretrievable life into the hard currency of language. Conjuring by incantation. And it works beautifully, as Auster gives voice to the emotions he was unable to express at the time.