Book review: With Charity For All: Why Charities are Failing and a Better Way to Give 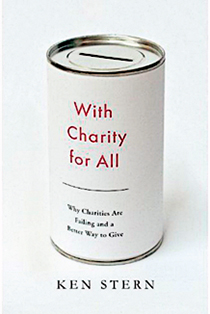 Canadians give $8.5 billion a year to charities in support of many worthy causes. But how useful are those donations? Stern claims a great deal of charitable giving is not only misguided and flawed, but counterproductive as well. And he’s convincing enough that a wholesale rethink about what makes charities effective seems in order.

Stern, former CEO of National Public Radio in the U.S., adopts a private sector approach to charitable work—reasoning the characteristics that allow successful corporations to thrive should apply equally well to non-profits. Chief among these factors are internal capacity and rigorous attention to outcomes.

Keeping internal costs low has become a fixation across the charitable sector in Canada and the U.S. Many popular ratings of charities focus almost exclusively on administrative expense ratios. And while excessive salaries or perks can be warning signs of ineffective charities, non-profits that lack proper administrative strength cannot grow, innovate or deliver effective, long-term aid.

A close look at charities drilling wells in African villages, including Kemptville, Ont.-based Ryan’s Well Foundation, brings up many uncomfortable questions about charitable outcomes. Well-drilling organizations often boast of their great success drilling new wells in poor, dry areas, offering shots of happy villagers enjoying their first burst of clean water as proof. But Stern warns it’s one thing to stir up enthusiasm and money for new wells; it’s quite another to track that well, supply replacement parts and keep it in running order for decades. Upkeep of this sort requires significant internal capacity, something most charities have forsaken in their rush to pare administrative costs to zero. And donors generally (and perversely) find the prospect of drilling new wells much more enticing than dreary maintenance. The unhappy result, says the author, is a “charitable failure” consisting of “tens of thousands of abandoned wells across the developed world.”

He advises anyone looking to maximize the impact of their donation dollars to ignore administrative expense ratios, glossy pamphlets and heart-warming anecdotes in favour of the humdrum business of keeping the machinery in good working order, whatever the cause may be.