Worshipping a history of porcelain

The White Road chronicles a history of men obsessed with porcelain 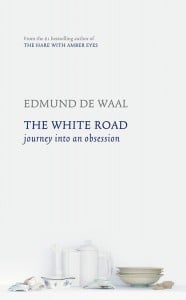 THE WHITE ROAD: JOURNEY INTO AN OBSESSION

Talk about burying your lead, that gravest of journalistic sins. There is much that is attention-grabbing in de Waal’s love letter to porcelain, the fabled “white gold” of ceramics, as well as enough self-indulgence to make a reader gently close it from time to time. But nothing becomes the book like a section near its conclusion. That’s where de Waal gathers his thoughts after he learns his passion for the white gold was shared with Heinrich Himmler and, to a slightly lesser degree, Hitler himself—to the extent that, even after coal shortages in the winter of 1945 meant no fuel was sent to the crematorium at the main Dachau concentration camp, supplies for the kilns never stopped at Allach, the Dachau sub-camp where slave labourers made porcelain figurines for the SS—white porcelain, at that. The SS was as obsessed with uncoloured purity as de Waal: “White porcelain is the embodiment of the German soul,” reads Allach’s ﬁrst (pre-war) catalogue.

De Waal’s response is honest and raw, quoting at length from surviving camp inmates’ testimony; so, too, is his plain statement of where the knowledge leaves him: “This white porcelain has cost,” allows de Waal, a British ceramics artist, but it’s still his love, his white road, his “way of starting again.”

It all casts a startling retrospective light over the first 300-plus pages of the book, especially those parts—which seemed excessive, even at first reading—where de Waal waxes poetic about how “white is truth . . . white is wisdom . . . white is Revelation itself.” De Waal can write, at times brilliantly. His 2010 family memoir, The Hare with Amber Eyes: A Hidden Inheritance, which followed the history of de Waal’s Jewish relatives by tracing the travels of 264 Japanese netsuke—miniature sculptures— he inherited from his great-uncle, was a bestseller that wowed reviewers, too. His rendition of the story of porcelain—made of two kinds of mineral (petunse, or porcelain stone, and kaolin, or porcelain clay), fired to “ridiculous temperatures” (above 1,300° C), first made in China 1,000 years ago and remaining an insolvable puzzle for covetous Westerners for five centuries—is absorbing, if often bogged down by personal digressions that are considerably less interesting.

But it’s the stories of the other porcelain obsessives that look askew in the shadow cast by Himmler, especially the 14th-century Chinese emperor whose requirement for “transcendence” in the whiteness of imperial porcelain products scarcely seems less demanding than de Waal’s own, and Augustus the Strong’s. The 18th-century Elector of Saxony was a key figure in the Western history of porcelain, supporting the chemist who finally cracked the code and establishing Europe’s first factory at Meissen in 1707. Augustus, one in a long line of mad German princelings, was also so obsessed with porcelain that he diagnosed himself with Porzellankrankheit (porcelain sickness). He once reportedly traded an entire regiment of fully equipped soldiers for 151 pieces; in any event, Augustus’s porcelain inventory at death added up to 35,798 pieces. De Waal calls his book a “journey” and a “pilgrimage of sorts.” He might want to consider “cautionary tale.”