Weird in a good way 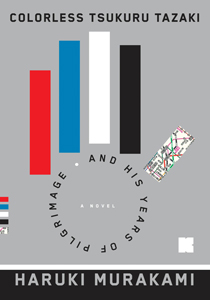 COLORLESS TSUKURU TAZAKI AND HIS YEARS OF PILGRIMAGE

Murakami consistently delivers plausible weirdness. This latest novel sold more than a million copies in its first week of release in Japan and, now, English readers get to see what the fuss was about. The reader joins Tsukuru Tazaki, a self-professed loner and unremarkable fellow, as he tries to make sense of a teenage trauma. He once felt like an integral part of a group of inseparable five friends, until, one day, he was exiled without explanation. He draws the worst conclusions about his self-worth—only the superfluous get discarded— and then more or less drifts like a ghost until his mid-30s, when he decides to finally get to the bottom of what happened and how he feels about it. Weird indeed, but somehow plausible in Murakami’s deft hands.

Tsukuru’s self-knowledge comes belatedly. For years, he retreated beyond indifference and aloofness. He was the kind of guy who did not like his name, nor dislike it. If asked about his job, he’d say he was not really satisfied, but “not particularly dissatisfied, either.” He was colourless, “with no special defects, nothing outstanding” and “always aiming for what was average”—or so he told himself. In fact, he totally misjudged how others perceived him, but he never let anyone close enough to correct his gloomy view. Lonely spirals can go on infinitely, like a drifting rock in space. Lucky for Tsukuru, a no-nonsense lady arrives to snap him out of it.

Something is not quite right with the pacing of the novel. The plot peters out, leaving much of the book feeling like denouement, and Murakami does not maintain the palpable tension of the early chapters. Some seemingly promising plot threads are abandoned to dangle. Not much happens for long stretches, though there is plenty of thinking and talking about feelings. Yet you’ll still find the pages turning, because Murakami provides clear, declarative sentences, gorgeous similes and heaps of insight about all those lonely souls out there. As for Tsukuru, he had a habit of watching people ﬂow through Japanese train stations. The cacophony and chaos threaten to overwhelm, and swarming masses care nothing for the individual. But pay close enough attention, as Tsukuru does, and order emerges from the ebbs and flows. Everyone has somewhere to go. This comes as some consolation to Tsukuru, and so it should.