In The High Mountains Of Portugal, Martel links tales of the dead and the grieving 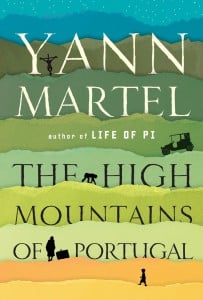 The High Mountains Of Portugal

“This is home, this is home, this is home,” murmurs an elderly widow as she climbs inside her dead husband’s body, somehow—for they are the same size—ﬁtting comfortably within a chest cavity already crowded with a chimpanzee and a bear cub. No, there really isn’t anyone else in CanLit quite like Martel. When it comes to the maxim that life is a tragedy (as witnessed by its outcome), with a comic texture (as per its absurdities), Martel is certainly down with the second half—the widow carts the husband’s corpse about in a suitcase until she finds a pathologist with the proper skills and tools to, so to speak, let her in—but hit-or-miss in his treatment of the first part.

His signature themes—the wafer-thin and permeable wall between animals and people and the superiority of story to mere facts in creating human reality—combined in a singularly appealing way in 2001’s Life of Pi and to alienating effect in Beatrice & Virgil. The High Mountains of Portugal, not just a story about home but about how home is a story and not a place, falls solidly on the hit side.

The homesick widow notwithstanding, dead wives and dead children mean Martel’s three linked tales are dominated by three grieving men. In Lisbon in 1904, Tomas, rocked by the loss of his lover and child, takes to walking backwards, to signal that he is “objecting” to the undeserved burden of sorrow God has placed upon him. Tomas becomes obsessed with the diary of a 17th-century missionary to the slaves held in Portugal’s African colony of São Tomé. Father Ulisses, reduced by the scarifying details of his task to a Tomas-like slough of despond, responds by crafting a religious object meant to turn the world upside down: “It shines, it shrieks, it barks, it roars.”

Convinced the object is somewhere in Portugal, Tomas—seeking a fist to drive into the face of God—sets out to find it in the first auto seen on the back roads of Portugal. The journey, complete with angry stagecoach drivers who react like cabbies seeing their first Uber driver (except more violently), is meandering slapstick, which makes the abrupt conclusion to it that much more powerful.

Thirty-five years later comes the story of the pathologist and the widow, who hails from the same remote village of Tuizelo where Tomas’s quest ended. She mentions in passing that her husband, in his grief for their lost son, had spent years walking backwards after seeing a mad stranger doing just that. By the 1980s, when widowed Canadian senator Peter Tovy shows up at his ancestral home, the entire village walks backwards at funerals, although no one remembers why. Tovy does encounter Ulisses’s creation, just as readers have long expected him to. His response, though, is a thought-provoking surprise, and the final grace note to a remarkable novel.