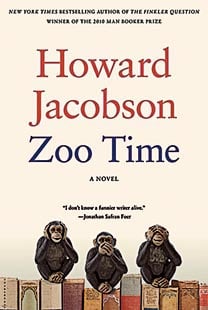 When Jacobson won the 2010 Man Booker prize for The Finkler Question, he was already writing Zoo Time—and laughing his head off. The book’s first chapter, “He Stroke She”—a cheeky play on politically correct punctuation—has novelist Guy Ableman politely fending off charges he hates women and children, shoving an organic sausage roll down his throat in an Oxfam bookstore for the benefit of a disapproving clerk, and then “releasing” his own novel from the store’s stuffy shelves. When the police catch up with him (releasing didn’t include paying), Guy explains: “The book as prestigious object and source of wisdom . . . is dying. Last rites can at least be given with dignity. It matters where and with whom we end our days.”

It may seem a bit rich for one of the U.K.’s most decorated authors to be lamenting the current state of literature, but Jacobson’s prose is too much fun to mind. Plus, he’s generous in assigning blame. Swipes at vampire series and Swedish whodunits abound (and, despite their ubiquity, frequently amuse), “fat checkers” are ridiculed for lacking imagination, all variety of electronic “platforms” are skewered for killing the act of reading. But none come off as shallow as the literary writer. Guy’s world is one of scheming narcissists, in which every word produced by one writer causes his compatriots to die a little, and the unspoken taboo against seducing a rival’s spouse has nothing to do with honour—it’s about depriving said rival of plot material.

Which is just what Guy needs. On a mission to prove a book can be both important and smutty (and unable to do much beyond “mouth-writing”), Guy wonders whether now is the time to act on his long-simmering lust for his mother-in-law, Poppy. As he half-pursues this train wreck of an idea, his deep attachment to his sharp-tongued wife, Vanessa, becomes both obvious and endearing. But this narrative feels secondary to the more gripping saga of literature’s plight, about which Jacobson’s conclusion is neither pedestrian nor clear. It’s a bit frustrating, until you find yourself wondering: what makes a book matter? Leaving readers with such a question is a good start.