'Spider-Man, Turn Off the Dark' may be the first musical to credit its success to stage catastrophes 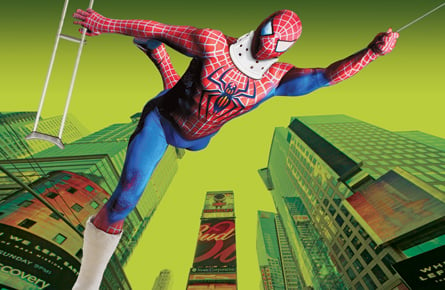 A Sunday matinee of Spider-Man, Turn Off the Dark is going smoothly. Too smoothly. Unlike the performance where a stuntman fell 20 feet onto the floor, or the one where actress Natalie Mendoza suffered a concussion that forced her to quit the show, this one pulls off the complicated stunts and moving sets that caused writer-director Julie Taymor (The Lion King, Titus) to run up a $65-million budget. But then, with only one more number left to go in the second act, the prop people lower a giant spiderweb that looks very much like an old gym net—and it gets stuck on the way down. The musicians keep playing, stagehands come out onto the stage to fix it; Spider-Man, or perhaps it’s one of the many stunt Spider-Men, is pacing around in the wings with his mask off. Finally, a sheepish offstage voice announces that the show is experiencing a delay. The audience bursts into some of the most enthusiastic applause of the afternoon. There hasn’t been much clapping for the songs by U2’s Bono and the Edge; this is what they paid to see: something going wrong at a legendary showcase for theatrical disasters.

That may be a typical moment from the longest and most lucrative tryout period in the history of musical theatre. Spider-Man keeps delaying its official opening; it’s been in previews since November, and last week the producers pushed the date back by another month, to March 15. And why should it actually open? If the previews end, it’ll have to contend with critics—and the only critic who seems to like it for the moment is Glenn Beck. He called it “by far the best show I’ve ever seen,” and argued that it has a conservative message because the villainous Green Goblin is “an atheist, godlike scientist who’s in bed with the giant government.” On the other hand, as a show “trying out,” where things can go wrong and an executive producer has to walk out to assure us that the New York Labour Department has declared the show safe for the actors, it’s doing great: last week the New York Times reported that it “played to full houses” and managed to gross more at the box office than Broadway’s biggest hit, Wicked.

Some shows, particularly those that try out in New York like Spider-Man, can be hurt by nasty gossip during the preview period. But the bad word of mouth in this case seems to have been good for the show, because of all the publicity it’s generated. Spider-Man has been a target for late-night comedians (like Conan O’Brien, who regularly features parodies of the musical on his show) ever since it ran out of money during rehearsals. The original producer pulled out, replaced by Michael Cohl, the Canadian concert-tour producer who has handled the Rolling Stones and Michael Jackson—and also had a hand in Canada’s most expensive musical flop, Lord of the Rings. But Lord of the Rings’ inflated budget just made it a bad joke; Spider-Man’s problems are actually pulling in people who aren’t theatre fans. Jeremy Gerard, the theatre critic for Bloom­berg News, told Maclean’s that “sales did spike after the reports of the injuries.”

Not only does the bad news sell tickets, it pulls off a sleight-of-hand trick greater than any of the special effects Taymor has devised: it distracts our attention from the flaws that matter. Most of the technical problems can be fixed, and mostly had been by the time of that Sunday performance; the last-minute glitch with the net came as a surprise because the show had been running without a hitch before that. (Though a moment when the stage was plunged into darkness created a murmur of excitement in the theatre: was this what we’d been waiting for? Unfortunately, the blackout turned out to be part of the story.) But as New York Post theatre columnist Michael Riedel points out to Maclean’s, Taymor’s team has been so busy with technical problems that they’ve been prevented “from doing absolutely essential work on the show creatively.”

For instance, there’s the book, the first that Taymor has ever written (in collaboration with playwright Glen Berger). Much of the script has shown a lack of interest in the famous comic book story; it plays the death of Peter Parker’s Uncle Ben as though it’s a throwaway bit that the audience couldn’t possibly care about. Other struggling musicals have saved themselves by hiring new writers, but Riedel says that, “as best as I can tell, they’re not bringing a professional book writer in to help restructure the show.”

So Taymor remains completely in charge, and that means it’s unlikely that anyone will get rid of the new character she’s created: Arachne, a half-woman/half-spider dreamed up by a female nerd as a feminist statement about comic books. Arachne’s attempt to manipulate Spider-Man is the focus of Taymor’s second act, a semi-autobiographical allegory that has almost nothing to do with the comics and could reduce Peter Parker to a minor character in his own show. “Arachne is her stand-in,” Riedel says. “When she flies up to the top of the theatre and says ‘I’m the only artist working in the world today,’ that’s how Julie sees herself.” Even the production team admits this section is not making any sense: Cohl told the Wall Street Journal that “some people are confused” by the second act because “it’s hard to tell that it’s all an illusion, it’s all a dream.” He didn’t say why it’s a good idea to have an act that’s all a dream. Taymor told the New York Times that she would use the extended tryout for “finessing” the problems with the act, but while she’ll try to make it clearer, “I’m not changing the story.”

A problematic plot can be saved by great songs, but even among the defenders of the show, there have been few defenders of the music and lyrics (except for Beck, who called the score “hit after hit after hit”). In the theatre, where songs need to be clear and specific, the poetic pop songs of the U2 team come off as generic, with words that don’t say anything in particular about the characters. One of the few moments of musical characterization comes when the evil Green Goblin sings a few bars of someone else’s song—Rodgers and Hart’s Manhattan—creating a sense of relief that finally there’s a song by people who knew how to write for the stage.

So far, the show has not overhauled the songs, partly because the U2 members were off on tour. Gerard thinks it may add to Taymor’s problems that “the authors of the score were not present, the way the conventions of Broadway demand.” They may not have time to replace or revise all the weak numbers, even with the extra month. It doesn’t help, Riedel points out, that rewriting may be prohibitively expensive with a show like this: “Because of the technical complexity, to put a new song in might take five days.” So the changes are likely to be only cosmetic, Riedel continues. “I think what we’ll see happen is that they do tweaking here and there, and they’ll think they’ve made great strides, and it’ll be as boring as it was when I saw it on the first preview.”

But this and other creative problems have been almost non-issues in Spider-Man’s advance buzz. Instead, it’s been all about the safety issues. Gerard explains that the audience wants to see a malfunction because “it gives people a sense of ownership of their performance. They know that something unique happened at their performance, and they can dine out on that for weeks.” When the New Yorker’s Michael Schulman talked to audience members, one told him, “I hope somebody falls but they’re okay,” while another said, “there’s a certain allure to this being a very dangerous performance.” The aerial fights and moving sets may be in the service of very little story, but in a time when live theatre is trying to match the computerized splendour of movies, people can’t help but be attracted by the news that they could get the one thing movies can’t provide: genuine uncertainty about whether the stunt guy will make it.

The only thing that could keep people away at this point would be a slate of bad reviews—but most critics are respecting the fact that the show technically hasn’t opened yet. Only technically, that is: it’s playing on Broadway, it’s charging full prices for tickets, and it’s selling Spider-Man T-shirts and other merchandise in the lobby. Some critics, realizing that the show is gaming the traditional preview system, are breaking the embargo; Gerard was one of the first critics to file what he calls “an interim report” to let people know the show’s creative weaknesses. Now that the opening has been delayed again, other critics may finally give up waiting and start writing about it. But the lack of a clear opening date could prevent the reviews from really hurting the show. “The smart people on the team are hoping the critics will come higgledy-piggledy,” Riedel says, “so you get one bad review here, one bad review there, instead of an avalanche of bad reviews.” In the comics, Spider-Man is always getting into trouble because the Daily Bugle prints nasty stories about him. On Broadway, negative newspaper stories can’t stop him now.