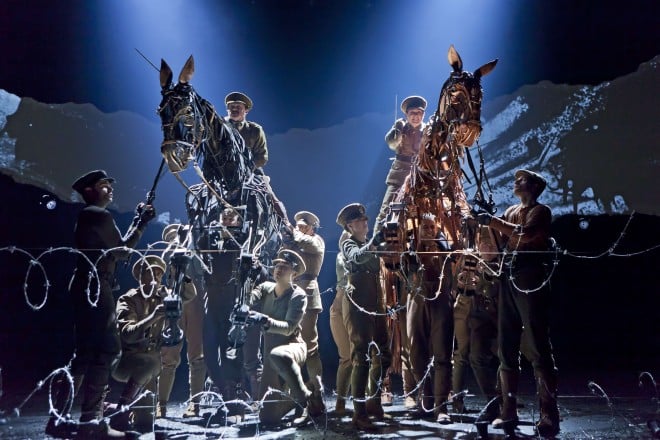 A scene from the Toronto production of War Horse

After a triumphant march from London’s West End to Broadway, War Horse opened last week at Toronto’s Princess of Wales Theatre to rhapsodic reviews. Sporting a Canadian cast, the Mirvish production has wowed audiences and critics alike with its robust spectacle of horse puppets brought magically to life amid the fury of the First World War.  So when I had an opportunity to see a recent performance, I was pumped. Unlike some of my film critic confreres, I’d actually liked the Spielberg film War Horse (adapted from the same 1982 children’s book by Michael Morpurgo). I’d surrendered to its epic sentiment, flung myself through its barbed-wire gauntlet of sentiment and cliché, and quietly wept. The acclaim for the play was far more unanimous than for the movie, so I was fully expecting to be blown away.

To voice a dissenting view on War Horse, the play, is as uncool as confessing affection for War Horse, the movie. But the play was hard to love. Before I get lynched for crimes of critical insanity, let me clarify. I loved the staging. And I loved the horse puppets. Everything people say about these strangely animated creatures is true. Even though they’re being trotted around by clearly visible puppeteers, you watch those horses and believe they’re real. The suspension of disbelief is uncanny. The horses are fully formed characters, layered with uncanny nuances of motion—and emotion.

I wish I could say the same for the humans. I’m no theatre critic, but I was shocked by the strident pitch of the performances and the unleavened melodrama of the dialogue. Most of it was shouted, not spoken. Of course, drill sergeants and soldiers in the battlefield are supposed to be yelling at each other. But even on the farm, before Joey, our horse hero, gets sent into battle, virtually every scene is shouted.

Yes, I realize this is theatre, not film, and the actors have to play to a massive house. But after being spoiled by the naturalist  brilliance of dramatists like Robert Lepage, I’m always surprised that the old declamatory style of stage acting is still considered normal in a Broadway-scale production—especially one that employs such breathtaking innovation on other levels.

Spielberg’s epic is just as schmaltzy and old-fashioned. It’s shot on 35 mm film as a classical landscape epic in the style of David Lean (Lawrence of Arabia). But while Spielberg had to endure critical sniping for being so deeply conventional, the play is let off the hook, largely because of its visual spectacle, which serves as a welcome sign that we’ve come a long way from cheesy theme park thrills like the helicopter in Miss Saigon. Even critics who praised Spielberg’s film felt obliged to apologize for surrendering to its sentiment. (“While War Horse is, like so many of Mr. Spielberg’s films, a work of supreme artifice, it is also a self-conscious attempt to revive and pay tribute to a glorious tradition of honest, emotionally direct storytelling” – A.O. Scott, New York Times.) That has not been the case with critics hauling out superlatives for the play.

Aside from the puppetry, the play’s staging is elegant and ingenious, especially its use of torn strips of backdrop, which serve as a screen for projected animation. The script, on the other hand, is more banal than the movie’s screenplay, the characters are less developed, and the story is thinner—although the basic plot remains the same. A drunken tenant farmer buys a thoroughbred horse in a village auction after getting drawn into a pissing contest with his landlord. The farmer’s son, Albert, falls in love with the horse, names him Joey, and against all odds trains him to plow the field. As the Great War breaks out, Dad goes behind the boy’s back to sell the horse to the British Army. We follow Joey on a hellish odyssey as he becomes a slave to British, then German troops in the killing fields of Europe, until boy and horse are inevitably reunited.

In other words: boy meets horse, boy loses horse, boy gets horse back. In the movie, Albert disappears for the entire mid-section of the narrative, but he has a more consistent presence in the play. The play, meanwhile, strips out some dimensions of the story that the movie preserves—notably the grandfather of Emilie, the French farm girl who briefly adopts Joey. However, Addison Holley, the young actress who plays Emilie in the Mirvish production, is wonderful. From the moment she appears onstage, she has a natural presence that fills the theatre (without shouting). The effortless conviction of this child made me realize what many of the other, older actors were straining so hard to achieve and why they fell short.

But as I said, as someone who spends too much time staring at a screen, I’m not qualified as a theatre critic. Stage magic is a delicate and elusive thing; unlike film, its power can fluctuate from one performance to the next. It’s also quite possible my reaction to the play was the result of hyperbolic expectations colliding with assumptions set by the film. But I do find it curious that Spielberg’s War Horse has been savaged for many of the same qualities that have made the play invincible. 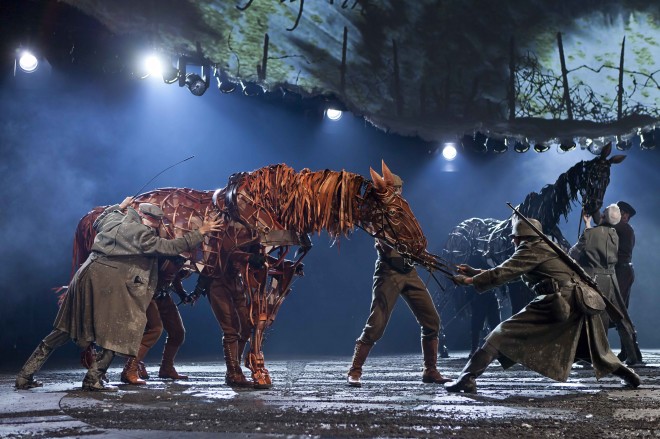 A scene from the Toronto production of 'War Horse'