Architects and designers mine memories of migration at the Canadian pavilion

While Canadian architecture has had its moments on the world stage–think Moshe Safdie or Arthur Erickson–the prevalent feeling among a generation of up and coming architects these days is that we’re stuck in a backwater when it comes to innovative building design. “It feels a little bland or a little polite,” says Johanna Hurme, a founding partner of the Winnipeg-based firm 5468796 Architecture, “We are constantly trying to define what Canadian architecture is.”

Hurme is part of a team of three curators who organized the Canadian Pavilion’s exhibition this year at the 2012 Venice Architecture Biennale; they call themselves the Migrating Landscapes Organizer (MLO) and are hoping the exhibit, whose theme is “Im/migration,” will reinvigorate the Canadian design scene by exploring the architectural potential of the immigrant experience. Their show is the culmination of a year and a half of competitions and exhibitions, from which 18 finalists were chosen to represent Canada. 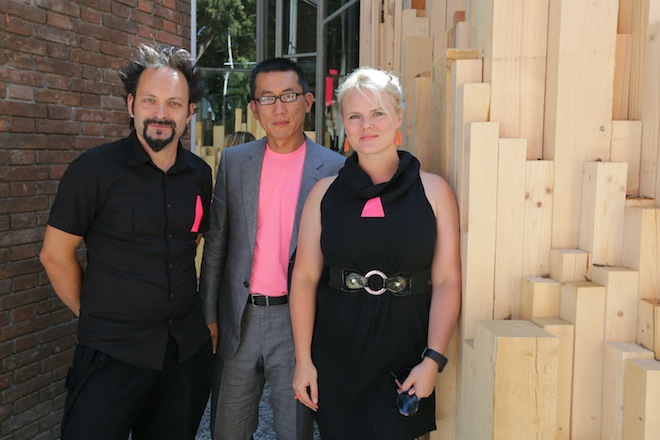 For the purposes of the exhibition in Venice, the show’s curators— Hurme, her colleague Sasa Radulovic from 5468796 Architecture, and Jae-Sung Chon, an architecture instructor from the University of Manitoba—have completely transformed the permanent Canadian Pavilion, one of 29 national pavilions in the Giardini della Biennale, a large lagoon-side park where most of the international architecture festival takes place. Much of the space in and around the pavilion has been filled with lumber cut in four different lengths, which acording to the curators, is meant to evoke Canada’s pluralistic cultural landscape where newcomers are welcome to express their own distinctive experiences. “One of the dangers of global architecture is its dominance,” says Chon. “It is very trendy and fast moving. But if you step back and look at your hyphenated condition as a starting point, there is a much more rich condition that you can bring to the table.”

Using this expansive and malleable “landscape” made of lumber, the 18 teams of Canadian architects and designers have installed their various models, which consist of dollhouse scale structures, sculptural objects, and figurines, though some teams have just rearranged the lumber to make their architectural statements. Each model is positioned alongside a tablet device with a video of one of its authors recounting the story of immigration that inspired the work.

In one video, Felix Tue, a Canadian architect from Romania, recounts a story about a space that “remained outside my new house, organic and inaccessible like a children’s game from the past.”

In another, Amirali Javidan, a Canadian architect from Iran, recalls the chants of “Allah O Akbar” from the rooftops of a densely packed Iranian city where he lived during the revolution against the Shah. He draws a contrast to the suburban neighborhood of detached houses with pitched roofs in Edmonton, Alberta where he later moved to, and where “the buildings never spoke.”

Travis Cooke and Jason Kun, two Canadian architects born in Canada, describe the “Winnipeg Condition,” in their video. That’s the provincial ache “of wanting to be elsewhere even when a place is your home.”

According to the curators, the search for architectural forms of expression that can address different cultural identities is especially relevant in Canada. They note that the country is relatively welcoming of cultural diversity, but does not have an architectural heritage to reflect that diversity.

Hurme says that the dominant public perception of the country’s architectural heritage is often bound up in stereotypes, such as what she terms “Vancouverism,” the heavy timber construction from the country’s West Coast. 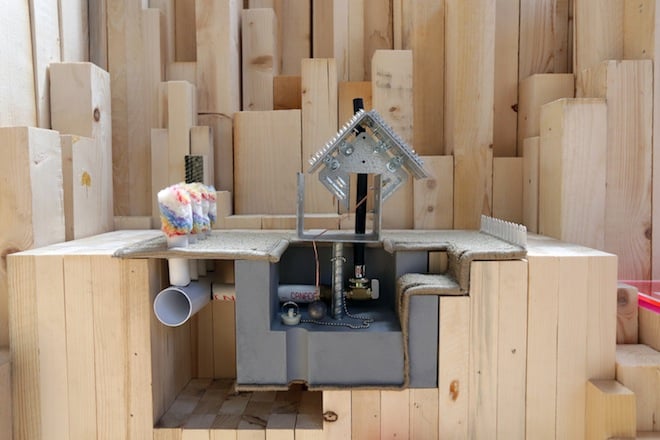 MLO is determined to change this. As part of their effort to transform Canada’s design identity, the curators have chosen to use pink on their exhibition literature as an alternative to Canada’s national color, red. “It’s indicative of perhaps a new red that we can promote in Canadian culture,” Chon explains.

Until recently, the design world has only had a superficial use for the types of cultural memories recounted in this exhibition, many of which speak to fundamentally different conceptions of the way that space is used. But Migrating Landscapes speaks to a growing interest in forms and styles that can express cross-cultural perspectives without descending into postmodernist token gestures.

This concern for a more spatially and materially distinctive representation of different cultural indentities gained prominence in the architecture community earlier this year with the awarding of the profession’s top award, the Pritzker Architecture Prize, to Wang Shu, a Chinese architect who is known for incorporating materials and design elements of traditional Chinese courtyard style houses into his contemporary designs.

The MLO curators say that their show with its figurines, sculptural shapes and unrealized structures is just a starting point for Canada. But they note that this country, with its relative tolerance for immigrant cultures, is probably one of the best places to explore the architectural issues raised by immigration.

“Around the world today a lot of countries are closing their doors, immigration wise,” says Chon, “ But the Canadian field is still open and positive, which creates a very interesting exploratory ground for this global-local hyphenated condition to flourish.”