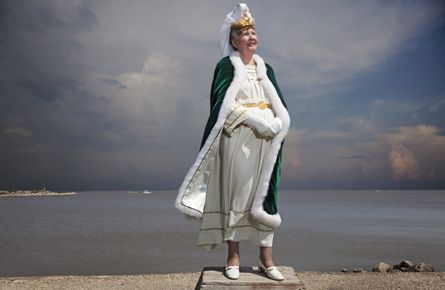 Does the idea of another Pioneer Days or Lobster Fest make you yawn? Don’t feel like dropping a twenty for three minutes on the Scrambler? Then check out some of Canada’s oddball summer festivals instead. Here’s just a few of the alternative events happening in a town near you.

Pingfest
July 18
Halifax, Nova Scotia
Fans of Coronation Street first logged out of their Internet chat rooms in 1996 to meet in a Halifax pub for the inaugural “Pingfest.” Since then, “Pingfests” have become semi-regular events where Corrie fans battle it out over fifty years of trivia. The next big meeting is scheduled for July 18. No one is quite sure why it’s called “Pingfest,” though one theory holds it’s a misspelling of the intended name, “Pintfest.” Last summer, star Michael Le Vell, who plays Kevin Webster, even made the short flight from Manchester.

Collingwood Elvis Festival
July 22-25
Collingwood, Ontario
Hosting dozens of Elvis impersonators at once may be a nightmare for many, but it’s not so for the people of Collingwood, Ontario. The Elvis Festival starts with a pub crawl at the local Pizza Hut on Friday night and ends with the crowning of a new king on Sunday night. In between, there are more gold sequins and curled lips than in Las Vegas.

Chocolate Fest
Aug 1-7
St. Stephen, New Brunswick
Is it any surprise that Canada’s chocolate capital, home of the Ganong Brother’s chocolate company and Canada’s Chocolate Museum, also puts on a chocolate-themed party for a week each August? The festival, made famous when it was featured on Rick Mercer’s show, is every fat kid’s delight. There are chocolate taste tests, chocolate dinners and even a chocolate pudding eating contest.

Gibsons Landing Fibre Arts Festival
Aug 19-21
Gibsons, B.C.
Crocheting, quilting, weaving, felting and woodworking are just some of the “fibre arts” celebrated in Gibsons, B.C. each August. People impressed with homemade blankets can shop for gifts at the vendor’s market, while those who are excited by the idea of silently banging needles together can learn to knit from masters.