The Montreal-born designer whose flamboyant creations adorned the likes of Laura Bush, Elizabeth Taylor and Barbra Streisand was 85 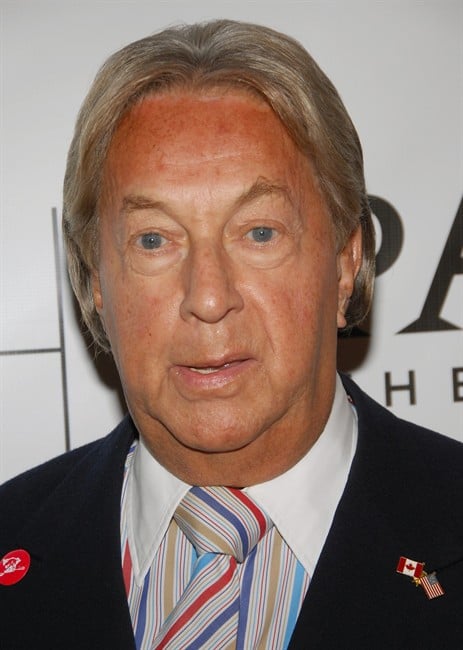 Until he closed his dress business in 2010, Scaasi — which was his given surname, Isaacs, spelled backward — specialized in made-to-order clothes, favouring ornate, brilliantly coloured fabrics and trimmings like beads and feathers.

“Fashion, it’s really about feeling good,” he told The Associated Press in 2002, when the Museum at the Fashion Institute of Technology showed an exhibit of his works. “It should be fun to get dressed. I like exciting and pretty clothes that help women feel exciting and pretty.”

While “less is more” was usually not his credo, perhaps Scaasi’s most famous outfit was a flimsy lace pantsuit designed for Streisand’s Oscar appearance in 1969, when she won the best-actress award for “Funny Girl” in a tie with Katharine Hepburn. It featured bell-bottom pants and matching top in spangly black lace, with white collar and cuffs.

Strategically placed patch pockets covered her breasts, but the effect of the thin fabric in bright light created the impression of nudity from some angles.

But Scaasi denied the intent was to shock, saying only that he told Streisand: “We have to do something very modern — really of today,” since to that point, moviegoers had seen her only in costumes from another era.

Scaasi’s most important legacy will be that of “his profound individuality,” Parker Ladd, the designer’s husband since 2011 and his partner of 54 years, said in a telephone interview Tuesday.

“Everyone who committed to his clothes will feel that way, and museums and history will remember him that way.”

“He was just the real deal, really from a time when fashion was really largely about elegance,” the fashion and media maven said from New York. “He loved women and he loved the stars that he dressed.

“We were always delighted by the fact that he was one of us: a Canadian from Montreal.”

Scaasi was born in 1930. His father was a furrier, and he became interested in art and fashion at an early age.

He trained both in Montreal and Paris and worked for designer Charles James — famed for his glamorous, sculptural gowns — in New York before opening his first ready-to-wear business in 1956.

“When I left Canada some 30 years ago, there was no room for creative talent in dress design,” he told The Canadian Press in 1991.

“At that time, the only way to really make it was to go to the United States.”

Over the years he won numerous awards, including the 1996 lifetime achievement award from the Council of Fashion Designers of America.

Because he did relatively little for the mass ready-to-wear market, he wasn’t as well known to the average customer as contemporaries like Oscar de la Renta or Liz Claiborne.

But he did design some high-end ready-to-wear clothes for specialty stores, telling Women’s Wear Daily in 2007 that he was creating a new ready-to-wear line because “women were stopping me in airports and asking me at dinner parties.”

Meanwhile, for a spectacular price, his socialite and celebrity clients got one-of-a-kind clothes — carefully constructed, tailored to their precise size, highlighting their best points and camouflaging their worst. He was known for taking dozens and dozens of measurements of clients’ bodies.

In his 2004 book, “Women I Have Dressed (and Undressed),” Scaasi described some of the things he made for Elizabeth Taylor: “A spectacular white satin ball gown with a rhinestone design of arches over the entire dress. … A long black velvet cape to go over it — it was fab. … A coral and turquoise petunia printed silk short dress with a cape coat in turquoise cashmere. … A beautiful short black chiffon number that was totally covered in tiny leaves and flowers with diamante clusters.”

Scaasi was a young man when he had his first White House client: Mamie Eisenhower. She favoured strapless evening gowns, Scaasi wrote: “I was very pleased that Mrs. Eisenhower wanted to look so stylish.”

For Barbara Bush, he designed a number of outfits including her two-toned, deep blue “Barbara blue” 1989 inaugural gown.

Laura Bush, he said, had to be persuaded to shorten her skirts slightly, to mid-knee. He praised her “long neck, which, of course, any woman would give her eyeteeth to possess.”

Scaasi said loyalty to the Bushes prevented him from actively seeking made-to-order business from Hillary Rodham Clinton. But to his surprise, he said, he met her in 1994 and learned that she had purchased a dress of his, a ruffly black number that she called “one of the prettiest gowns I own.”

Scaasi is survived by husband Ladd, with whom he shared homes on Manhattan’s Beekman Place, on Long Island and in Palm Beach, Florida.