Cattrall vs Gross in the gilded cage match of 'Private Lives'

When a battle of the sexes becomes an acting duel, a film critic finds it impossible to review the "moving target" of live theatre 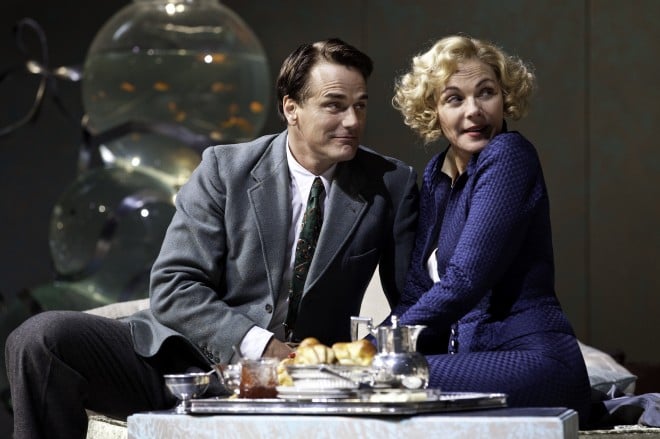 I would never presume to review theatre. I have enough trouble evaluating film, when the work is at least fixed. Even if the critic’s viewpoint is fluid, and the film may seem to change with repeated viewings, it’s still the same show. But theatre is a moving target. The physical chemistry of the actors, with each other and the audience, changes from one night to the next. And I spend so much time in movies that the flesh-and-blood presence of actors—the visceral bond between viewer and performer—makes me nervous, sometimes claustrophobic. Even if, on rare occasions, it can be electrifying, frankly, I find so much theatre too . . . well, theatrical.

This apologia serves to introduce some observations about seeing Paul Gross and Kim Cattrall in Private Lives, which I caught last week in Toronto at the Royal Alex after it had premiered to rave reviews. This is a show you want to root for. Originating last year with Cattrall in London, it’s now Broadway-bound, and Cattrall and Gross form the closest thing to a theatrical royal couple Canada has had since I don’t when. They’re both witty, debonair, confidently seductive and—pushing the envelope of middle age—defiantly sexy. Casting them as romantic misfits in a vintage screwball comedy seems inspired.

Cattrall is the bigger star, thanks to Sex and the City, so she tops the marquee; Gross, however, looms large in his native land, as the star who stayed home, played a Mountie, found comedy in curling, cast himself as a Canuck Christ figure in Passchendaele, and did Hamlet at Stratford—though I still prefer to think of him as the diabolical, half-mad theatre director in the proto-Office Stratford send-up, Slings and Arrows.

Directed by Sir Richard Eyre, Private Lives is an odd place for these iconic/ironic Canadians to find common ground—as Elyot and Amanda, a divorced couple who bump into each other at a French seaside resort, fortuitously booked in adjoining rooms, each dreading a loveless honeymoon with a new spouse. As I watched Cattrall and Gross negotiate Noël Coward’s gay 1930 farce, there was some culture shock, and not just because Cattrall and Gross e-nun-ci-ate in such plummy English accents. It’s because they yell at each other for much of the play, volleying insults back and forth with an intensity I haven’t seen since the old days of TV sitcoms. The dialogue, of course, is infinitely more sophisticated, as are the characters. But everything is so theatrical. After you’ve been acclimatized to the cinematic realism of Pinter, Shepard, Mamet and Lepage, the rambunctious modernism of Noel Coward’s high-flying wit takes some getting used to.

That said, this 1930 bubble of romantic misadventure is a luxurious confection. The actors move like dancers in a comic choreography. And the sets are breathtaking, from the wistful pastel elegance of the resort where the lovers meet to the Nautilus-like curves of the decadent art deco pad in Paris where they spend the last two acts after fleeing their honeymoons—a dreamy vision of divans and silk, complete with live goldfish swimming around a triple-decker bowl.

Private Lives is what they call a comedy of manners; but it’s also an ill-mannered comedy, a slapstick tournament of invective and innuendo. Occasionally it turns physical with a pratfall or a slap to the face, but mostly involves rapier duels of language, with hyperbolic vowels and razor-sharp consonants. Ringside in audience, watching Gross and Cattrall go at it hammer and tong, you can’t help but be wowed by the physical feat of the verbal performance, the rock’n’roll heroism of it. You wonder how they can do it night after night without losing their voices. Or their minds. So on some level, this battle of the sexes comes down to a battle of the actors, a contest of vocal virtuosity.

Which brings me to the cautious bit of criticism that prompted my opening disclaimer. Even though Cattrall is the star, I felt Gross showed more poise and presence onstage. After I blithely posted that sentiment on Twitter, another film critic who had seen the play tweeted that “both Kim Cattrall and Paul Gross are fantastic in Private Lives.” I have no idea if he was responding to me. But I immediately felt regret,  because I wasn’t trying to disparage Cattrall’s sleek, layered performance, which was as smart as it was sexy.

It was more of a technical observation. In the Thursday night performance I saw—likely not the same one the other critic saw—Cattrall’s dialogue tended to get stuck in her upper register, while Gross basked more comfortably in his full range. So in this battle of the sexes/actors, he appeared to be winning.

But for all I know, on another night it might have been the other way around. You’d have to go back to see the play again at least once or twice to be sure. (I don’t know how theatre critics manage to have the confidence of their convictions. Serious food critics often make several trips to a restaurant before making a judgment—not practical for reviewing plays.)

Yet I also wondered if Gross’s edge reflected an uneven playing field. Despite the elegant parity of the repartee, Coward seems to have invested more of himself into Elyot’s character than Amanda’s. I should mention there are two supporting roles—Trevor and Sybil, the newlywed ex-spouses of Elyot and Amanda—and a French maid who breezes in and out. As Sybil, Anna Madeley is deliciously superficial. Playing Trevor like a diminutive John Cleese, Simon Paisley-Day adds a droll counterpoint of comic understatement to the piece . . . Oops, this is starting to sound like a review.

Our seats at the Royal Alex were at the back of orchestra, so I probably missed entire layers of expressive nuance. But Private Lives had more effect on me than I expected. Over drinks afterwards, I found my diction had become more mannered than usual, and unnaturally precise. I thought I’d only been entertained by a flight of energetic insubstantiality, yet the play lingered in the imagination. Days later I still found myself musing over the fishbowl romance of Paul and Kim, wondering how the actors were really getting along, imagining the thrill of them taking it to Broadway—and remembering why I could never be a theatre critic.