Vote for your favourite Céline Dion song: Round Two

It's Céline Week here at Maclean's! We're pitting Céline Dion songs against each other. Round One saw some worthy contenders eliminated. It's time to vote in Round Two.

Round Two is closed! Vote in the final round right here.

But as one of this country’s premier songstresses sings her last Vegas tune, Maclean’s couldn’t resist making a big deal of it all. Do we really need an excuse? As Dion enters this new phase in her career, a campy new cool complete with carpool karaoke, we launch Céline Week. We asked readers to vote on Dion’s best song of all time. (More on that below.) We’ll also look at her best commercials, the very best photos spanning her long life in the spotlight, and so much more.

Maclean’s experts had devised a list of Dion’s all-time best songs, a legendary discography whittled down to a playlist of eight. Based on their popularity (according to Spotify plays), we seeded our picks from 1 to 8. We received more than 5,300 votes in Round One, which led to the elimination of ‘At Seventeen,’ ‘Ashes’, ‘Sous Le Vent’ and ‘Beauty and the Beast.’ Sorry, Céline stans, that’s the way it is. Now, it’s time to vote for your favourite in each second-round matchup below (you’ll see a poll beneath each pair of write-ups). The second-round winners will advance to a showdown at the end of Céline Week, pitting one finalist against another, Céline versus Céline. Vote away! 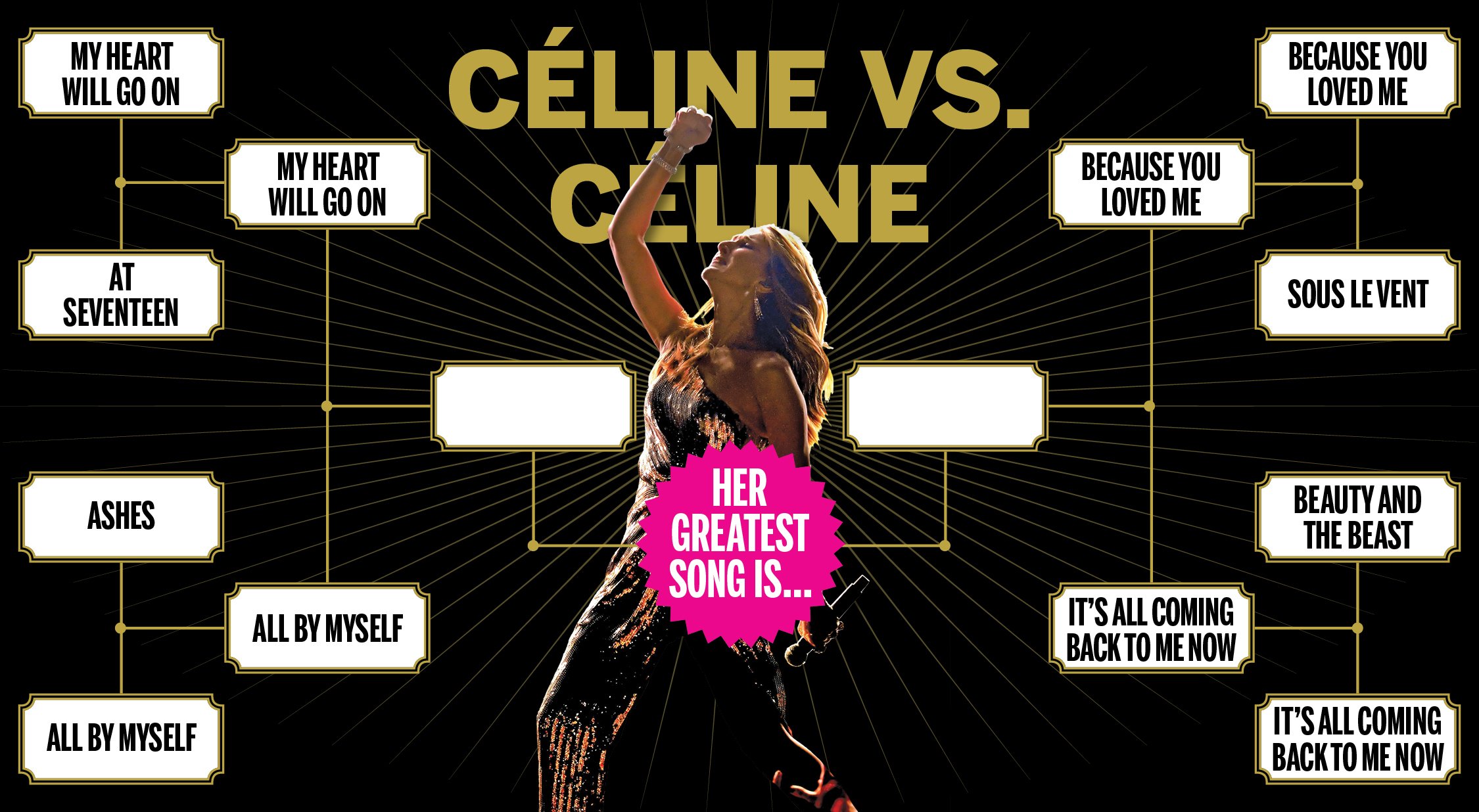 Here’s where the brackets stand now. Scroll down to vote in the semi-finals.

(And here are printable versions of Round One and Round Two.)

In Céline Dion’s vast repertoire of stomp-on-your-heartstring hits, there’s one song that truly stands alone—and it’s titled accordingly. Dion’s 1996 cover of Eric Carmen’s “All by Myself” is not just her best song, it’s a song that, at one point or another, everyone needs. Dion took this ballad about our deepest darkest fear and turned it into a cathartic experience. And with more Canadians living alone than ever before, we need that now more than ever. Because, even if you’re all by yourself, you still have Céline. —Ishani Nath

Rarely does a song so beautifully capture appreciation for that purest kind of love—a love that makes you shine, whether that’s from a parent, partner or friend. And not only does this complete jam (also the soundtrack for best journalism movie ever, 1996’s Up Close and Personal) put Bette Midler’s semi-comparable “Wind Beneath My Wings” to shame with superior vocal ability, it was an absolute monster hit, topping the charts in more than 10 countries and scooping up Grammy after Grammy. Céline Dion is everything she is because Canada lurves her. We should show our unconditional appreciation in return by crowning this song her best. —Sarah Boesveld