Welcome to the Dachshund UN

36 wiener dogs on a diplomatic mission

Dachshund dogs sit in their positions for the performance installation "Dachshund UN" in Toronto on Thursday, Feb. 28, 2013. (Michelle Siu/CP)

France is sleeping with Ukraine. Or, more accurately, France is sleeping on Ukraine. It’s a strangely peaceful alliance, particularly given that the United States is barking orders behind them and, down in the front row, two OPEC countries are taking negotiations a step further as Nigeria mounts Saudi Arabia.

It’s just another day at the Dachshund UN, a performance art installation created by Australian Bennett Miller that uses 36 wiener dogs and their volunteer owners to create a replica of the United Nations Commission on Human Rights. The work made its Canadian debut in Toronto on Feb. 28, where a crowd of approximately 300 curious spectators gathered in the downtown Harbourfront Centre to marvel at the melee. 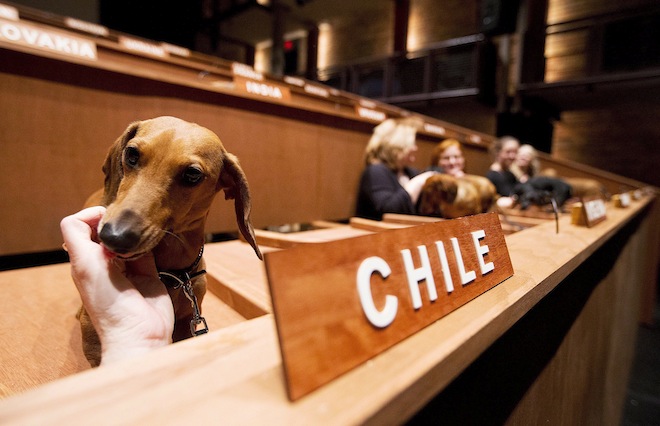 A dachshund is petted by its owner before the start of a performance installation "Dachshund UN", where dogs were used to mimic a United Nations Commission on Human Rights meeting in Toronto on Thursday, Feb. 28, 2013. Australian artist Bennett Miller created the show to question humanity's potential for creating a universal justice system. (Michelle Siu/CP)

Miller created Dachshund UN as a project for the Melbourne 2010 Next Wave festival, which had the theme of “No risk too great.” The project was a hit with audiences and, since then, Dachshund UN has far exceeded Miller’s expectations, with performances across Australia and internationally and plenty of social media buzz, after each show is over. Miller has an explanation for the success: “It’s the dogs, really, isn’t it?” he says, laughing. “The dogs are very entertaining.”

It’s nearly impossible not to love the dogs. Before the performance, a bearded Vice journalist who has sneaked behind stage to snap some photos of the pooches coos: “Oh, they’re so cute!” as Argentina and Mexico enjoy some pre-show snacks. When the curtain rises, the crowd laughs and applauds. Calls of “Ella, over here Ella!” and “Walter! Walter!” punctuate the buzz of conversation as owners in the audience attempt to get their dogs to perform, or at least look towards the crowd. After 50 minutes, the curtain drops and the audience groans, something that never happens at the conclusion of a real United Nations Commission on Human Rights.

Speaking after the show, Miller says he always hopes an audience will look for a deeper meaning, in addition to enjoying the spectacle. “It’s an attempt to describe both the positive and the negative aspects of the UN,” he says. Miller chose the dachshund for its restricted anatomy, for having “a big heart and short legs,” as he puts it. Dachshunds also have racial diversity. They come in red, black, brown and tan and can have short, medium or long hair. “It reminds people, I think, that we intend to really enjoy difference in animals, but we don’t always enjoy it, or appreciate it across cultures and between each other,” says Miller, who owns a red dachshund named Routh. (Miller’s mom takes care of Routh when her son is on the road.)

While using dogs makes each installation unpredictable, the Toronto installation had one brand-new element; it was the first time in a theatre. The installation was originally designed for an outdoor festival, where spectators come and go as they please and Miller stands in the crowd to observe. At the Toronto shows, Miller stands in the wings and people are forced to sit for 50 minutes. It gives a different feel to the show. “It gave the audience a chance to really study the object and really study the dogs and have it slow down a bit and have them think about it,” Miller says.

With the installation in a seated theatre, it did seem that there should be a bit more, well, theatre. There was no narrative arc, no plot twists or character development, as the UN human rights commission delegates yipped at each other with no ultimate conclusion. On second thought, maybe the change of venue makes the UN recreation even more realistic.

Dachshund UN in part of the Harbourfront Centre’s World Stage and it runs until March 3. Tickets are free, but can be reserved in advance. Miller is also bringing his installation to Montreal for the FTA festival on May 24, 25 and 26. That performance will be outdoors.